‘Hawkwind – every album, every song’ is another volume in Sonicbond’s ‘On Track’ series, this time taking on the Herculean task of documenting the prolific adventures of Dave Brock’s gang of space rockers in the recording studio over the past five decades.

Author, Duncan Harris, takes us on an album-by-album, track-by-track tour of every Hawkwind studio album, from the folk, busky and “startlingly melodic but totally unrepresentative ‘Hurry On Sundown’ (the opening track on the band’s eponymous 1970 debut) through to ‘The Fantasy of Faldum’ (the “sprawling, acoustic rock-based finale” of their most recent 2019 album ‘All Aboard The Skylark’).

Harris is never short of an opinion on any of Hawkwind’s vast output and his pithy one-paragraph assessments take us through the highs (‘Master Of The Universe’ from 1971′s ‘In Search Of Space’ is “the jewel” “the definitive Hawkwind song”) and the lows (‘Turner Point’ from 1982′s ‘Choose Your Masques’ is “by universal common consent… the worst piece of so-called music ever officially released under the name Hawkwind”).

The publication, of course, includes Harris’s take on the actual hit single ‘Silver Machine’ (“once the swirling fluttering synthesisers are removed, turns out to be somewhat bland rock and roll more suited to the 1950s than the 1970s”) as well as ‘Quark, Strangeness and Charm’ “the hit single that never was but should have been” (“a bouncy new wave tune that suggests Squeeze were avid listeners”).

Besides all the officially-released studio albums, Harris also includes a handful of essential live albums and a couple of albums from Hawkwind spin-off projects, giving us a grand total of thirty-two albums being pored over.

The book is also a hive of information about the band’s ever-fluctuating personnel and shifting musical direction.

Rather than simply giving us a standard intro piece to each album, as other authors in the series have done, Harris also groups the albums into eras representing different phases in the band’s evolutionary history. This allows for some additional context-setting over a defined period rather than each album simply being looked at as a momentary snapshot in time.

A fascinating well-researched book written by someone who, although you definitely won’t agree with him on everything, clearly has an unquenchable passion for the band and a detailed knowledge of its history. While Harris’s book has not filled me with a desire to seek out every Hawkwind album ever recorded I certainly came away with renewed respect and genuine affection for this most remarkable of bands.

Book review: ‘On Track: Fairport Convention – every album, every song’ by Kevan Furbank

Hawkwind at The Old Market, Hove 2014

The ‘On Track’ series by publishers Sonic Bond provides an album by album, track by track overview of a number of artists. The latest in the series to get this treatment are British folk-rock legends Fairport Convention. Author, Kevan Furbank, takes us on a fascinating journey through each of the band’s thirty studio album’s, from 1968’s self-titled debut to this year’s Shuffle and Go.

Each entry begins with a factual summary of personnel, recording information and release dates, followed by a brief potted history the album’s genesis and the band’s fortunes at the time it was recorded. That is then followed by Furbank’s review of each track. Having read a fair few books on folk-rock, Fairport and some of their leading personnel, most of the history was familiar to me. However, Furbank really comes into his own with his pithy and usually very insightful track by track reviews. And what he’s superb at doing is capturing the familiar styles of different Fairport personnel as well as some of the band’s most used external songwriters. ‘Tale In Hard Time’ one of Richard Thompson’s early songs on 1969’s What We Did On Our Holiday, for example, is thus introduced as “another of Richard’s gloomy/jaunty songs, an upbeat rhythmic number with slit-your-wrists lyrics” beautifully summing up a whole canon of classic Thompson output.

Furbank is also meticulous at pointing out where the band have returned to a song, as they have done on frequent occasions, and making comparisons with the earlier versions – or highlighting where the band have returned to a similar lyrical theme or musical arrangement in a different song. So if, like me, you were thinking I’m sure they’ve recycled that Eddie Cochran riff for one of those fifties rock n roll – meets trad folk song mash-ups just once too often, this book will tell you exactly which song and which album they tried it on first and where (perhaps unwisely) they thought it was a good idea to try it again.

I read the book over a single weekend, often playing the relevant albums as I turned the pages. I thoroughly enjoyed the author’s critical insights even if I did not always agree them. For those familiar with Fairport Convention’s history this will be a fascinating sit-down read, as well as a really useful reference for the future. However, if you are a Fairport fan looking to learn more this shouldn’t be the first book you read on the band. Start with Clinton Heylin’s ‘What We Did Instead Of Holidays’ or Mark Eden’s ‘Electric Eden’ or the band’s own authorised biography first and you will enjoy what this book has to offer all the more. 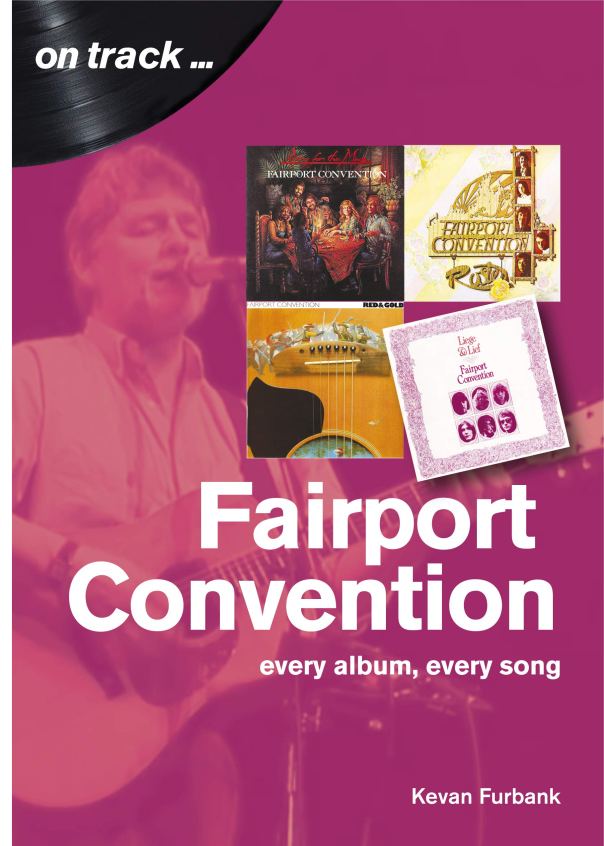