Folk-rock pioneers Fairport Convention have never been a band to shy away from celebrating their own legacy. When they decided to split in 1979 they held a big outdoor farewell gig in Cropredy, Oxfordshire that proved so successful they decided to stage it again each year, evolving into the big three-day festival we know today. Thirtieth, fortieth and forty-fifth anniversaries of the band have all been celebrated with emotional reunions of surviving ex-members and a similarly nostalgic trip down memory lane is scheduled for Cropredy this August.

An anniversary concert in north London, not far from where the band performed their first ever gig fifty years ago to the day, drips with symbolism. However, unlike the lavish reunions of the past, tonight was scheduled to be a fairly ordinary gig half-way through the band’s spring tour, albeit one that coincided with an extraordinary anniversary. For a band that has done more anniversary performances than many acts have done albums I was beginning to wonder what, if anything, would make tonight’s gig that bit more special than many of the other admittedly excellent performances I’d seen from this band.

The answer lay in the rapturous and sustained applause the band receive as they walk on stage tonight, even before they play a single note. The spontaneous wave of love and and affection is palpable and tonight was clearly going to be as much about the audience as about the band. Performing a mixture of songs from their new album 50:50@50 and older staples, original member Simon Nicol (joined 1967) together with “newbies” Dave Pegg (joined 1969), Ric Sanders (joined 1985), Chris Leslie (joined 1996) and Gerry Conway (joined 1998) provide a nice overview of different eras of the band. From the late 60s classic Sandy Denny/Richard Thompson era the unforgettable ‘Who Knows Where The Time Goes’ is an obvious highlight. While from the mid 80s, when Fairport became a working, touring band again, Ralph McTell’s ‘Hiring Fair’ is another genuine highlight of tonight’s set.

A couple of “surprise” moments are when Pentangle’s Jacqui McShee joins the band on stage to sing ‘The Lady of Carlisle’ the track for which she provides guest vocals on the current album; and when Sally Barker (who reprised a number of Sandy Denny songs when she toured with the surviving members of Denny’s post-Fairport outfit Fotheringay a couple of years ago) lovingly recreates the magic of Denny’s ‘Rising For The Moon’.

‘Matty Groves’ and ‘Meet On The Ledge’ are two songs the band could never get away without performing and for many years now have been the traditional climax to any Fairport gig. After an energetic ‘Matty Groves’ the band are serenaded with a spontaneous audience rendition of ‘Happy Birthday’ when they come back on for an encore. As tonight seemed as much about celebrating the longevity of the Fairport audience as celebrating the longevity of the band, this seems an especially nice touch and makes the ensuing sing-along to ‘Meet On The Ledge’ all the more poignant. Happy 50th Fairport! 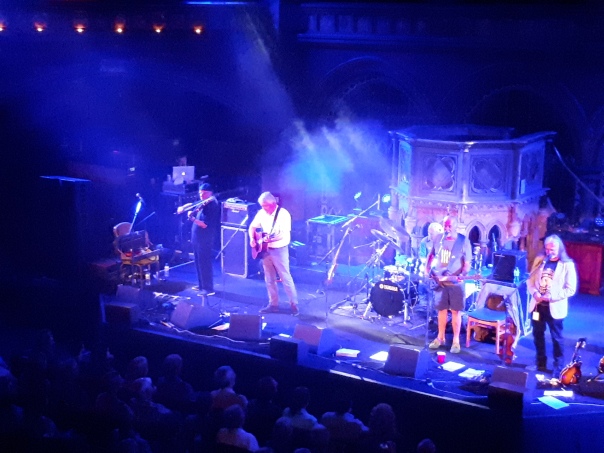