Ok, so it’s not the usual theme for my blog but ten years after my dad passed away I want to pay tribute to him and the wonderful, passionate, life-long love of music he helped give me. This is the speech I gave at his funeral ten years ago:

“On behalf of the family I would like to thank everyone for coming today and paying their respects to Alan Johnson, my dad. Of course, I have no need to remind any of you what a lovely man my dad was – what a sense of fun he would bring to every occasion, what a great help he was to everyone and what a fantastic friend.

As his family we got all of that and much, much more. He was a wonderful father to myself and Lisa, a wonderful step-dad to Ann and a wonderful grandad to Rosa and Isabella. But most of all he was a wonderful husband to Jackie – two people who not only loved each but loved every minute of each other’s company.

Growing up, my early memories of my dad was when he was working in a bakery then a sweet factory. Now obviously it’s every kid’s dream to have a dad who baked cakes and made sweets for a living but unfortunately neither of these were well-paid jobs. I remember him and my mum spending night after night assembling stacks and stacks of toy watches and at Christmas time sticking wings on Christmas tree fairies to earn some extra money. But as a child I was totally oblivious to any financial hardship. There was always so much love and so much fun when my dad was around I only found out much later on how tight money was at that time.

One thing I have certainly inherited from my dad is his love of music. I remember being ill in bed when I was about six or seven. In those days kids’ bedrooms were not what they are today – there were no TVs, stereos or computer games. But my dad carried his record player up to my room with a big stack of records so I had something to do. I remember playing all the records until I found the one I liked best and then playing it over and over again. My dad heard what I was doing and came up and we listened to it together. And we enjoyed listening to music together ever since. The list of bands I have seen with my dad reads like a who’s who of British Rock: Slade, Status Quo, the Rolling Stones, AC/DC, Whitesnake, Uriah Heep and Dr Feelgood. And I am not even going to mention the annual family outings to see Gary Glitter every Christmas….

I remember the first time they went on a cruise. Jackie told me how they had been invited to have dinner at the captain’s table. Jackie asked the stewardess why, of all the people on the ship they were to be given this honour. The stewardess explained to Jackie that the Captain liked to surround himself with interesting and unusual people, and that her husband was the first person he’d ever seen playing air guitar in the ship’s ballroom.

Something else I have inherited from my dad is love of a good debate. My dad had an opinion on everything (and you would often get to hear all of them in a single evening!). He was always proud of my political career but I think he was also slightly envious that anyone could be paid for arguing with people as a full time job and not just have to make do with doing it in the evening as a hobby. But there was a much deeper side to it than this. Like his parents before him he really did care about the world about him. He cared about justice. He cared about making life fairer and that is something I have been able to take forward in my own work. And though he argued with everyone I don’t remember him ever falling out with anyone.

Something I have not inherited from my dad, sadly, was his DIY skills. No challenge was ever too big for him. Whether it was rebuilding the battered bodywork of his Ford Anglia with hardboard and bits of wood – respraying it and painting on some home made “go-faster” stripes and it was as good as new. Or a few years ago when there were damp problems in his badly-built kitchen extension – he simply removed the bottom few layers of bricks, jacked up the entire kitchen on car jacks and then replaced the bricks. But it was not just do it yourself for himself – it was do it for everyone else as well. I know there must be so many people here today who remember him doing things for them – fitting new washing machines, helping with wiring. He just loved helping people.

It was a life cut tragically short. But it was not a life of regrets. He absolutely lived life to the full and he brought so much fun to every occasion and so much pleasure to those around him. I am proud of him. Goodbye dad – my friend.” 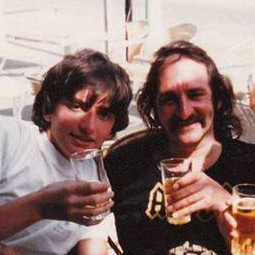 4 thoughts on “A tribute to my dad and an appreciation of a huge, life-long, deep musical education”