Folk by the Oak is the most civilised of festivals. Set in the historic grounds of Hatfield House in Hertfordshire, those used to turning up and getting frisked by legions for of security guards for taking even as much as a bottle of water in, will find this a very different experience. For this one-day festival punters turn up not only with chairs and food hampers but picnic tables, too.

Such a sedate setting did nothing to dampen the atmosphere down at the front of the stage for Richard Thompson’s set, however. With no backing band for this current series of acoustic dates, it was just Thompson and his acoustic guitar. Introducing Thompson, the festival compere said that this year had seen the biggest ticket sales for Folk on the Oak so far, telling the crowd the inclusion of Richard Thompson on the bill clearly had a lot to do with that. I couldn’t disagree. Thompson has rightly been rated as one of the world’s greatest guitarists but it is a wonder to be there and listen to the truly amazing sounds that one man can produce simply standing on stage playing an acoustic guitar.

A Thompson gig is never simply about watching displays of technical prowess, however. Being such a talented songwriter he has built up a stunning back-catalogue of great songs and he delivered a blinding set, including many of the songs that feature on his excellent just-released CD, Acoustic Classics.  We were therefore treated to stripped down acoustic versions of classic songs like I Want To See the Bright Lights Tonight, Walking on a Wire, Down Where the Drunkards Roll and, of course, 1952 Vincent Black Lightning. We also got some newer songs that have become classics like Savings the Good Stuff For You, from his 2012 “Electric” album and, from 2007’s “Sweet Warrior” album, Johnny’s Far Away, a modern-day sing-along sea shanty, explains Thompson, set on a cruise ship.  He also did a lovely tribute to his erstwhile Fairport Convention colleague, the late Sandy Denny, by performing a beautiful rendition of Denny’s Who Knows Where the Time Goes.

Thompson has genre-crossing and generation-crossing appeal and tonight the stunning guitar work and amazing songs demonstrate exactly why that is.

Setlist:
When the Spell is Broken
Walking on a Wire
Valerie
Saving the Good Stuff For You
Johnny’s Far Away
Pharaoh
1952 Vincent Black Lightning
Who Knows Where The Time Goes
I Want to See the Bright Lights Tonight
Between You and Me
Good Things Happen to Bad People
Beeswing
Wall of Death
Down Where The Drunkards Roll
One Door Opens
Tear Stained Letter 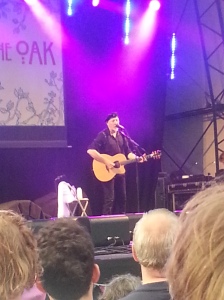