An added bonus of buying tickets for Black Sabbath in Hyde Park was having the chance to see Motörhead on the bill earlier in the day. Lemmy’s recent health problems had left some question marks over the future of the band and so, five years after I’d last seen them, it was good to catch up with them again on stage.

However, while Motörhead’s “best of” CD and their iconic No Sleep ’til Hammersmith live album are frequently blasting from my stereo, I must confess to having heard not a single album Motörhead have recorded since about 1982. And although we were treated versions of Stay Clean, Ace of Spades and Overkill that owners of the No Sleep… album will be very familiar with, there were several songs in the 45-minute set with which I was unfamiliar. The thing about Motörhead, however, is consistency: in sound, in quality and in attitude. So while a particular song they are performing may not be a classic from the Overkill/ Bomber/Ace of Spades era, it manages to sound exactly like it should be.

As well as iconic front-man/bassist extraordinaire, Lemmy Kilmister, Motörhead are Phil Campbell on guitar and Mikkey Dee on drums and while neither were in the band in the early “classic” years, Campbell has been with them for thirty years and Dee for over twenty.  As for Lemmy, you wouldn’t think it from his vocal delivery and certainly not from his bass-playing, but it’s during his brief between-song banter with the audience that you realise that Lemmy is now quite an old man.

Will Lemmy and Motörhead be around forever? Obviously not. Will they be performing for that much longer? If truth be told, probably not. Is it still worth seeing them? On today’s performance – most certainly yes. Catch them now while they are still a living, working unit, still delivering the classic Motörhead sound. 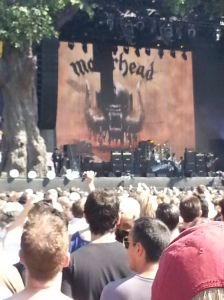