This review was also published by Get Ready To Rock here

Fairport Convention’s festival at Cropredy has been an annual fixture for almost four decades now but the big celebration this year was marking the fiftieth anniversary of the band’s formation. In the eight years since I have been going it has always been quite an eclectic bill, straddling folk, rock and retro pop. This year it leaned more towards the folk-rock end than normal because, it being the fiftieth anniversary, a number of sets from ex-Fairport members and close associates were on the bill. This meant there were lots of acts that I was really looking forward to, this time, even if there was perhaps a little less variety in the festival line-up than normal.

Before we got to the three-hour set from Fairport Convention on the Saturday night, therefore, there were plenty of highlights over the three days: including the ever-impressive Show of Hands; last year’s festival darlings, The Pierce Brothers, who returned for a repeat performance; and the Gigspanner Big Band (where Peter Knight’s trio join forces with folk duo Phillip Henry & Hannah Martin). Of the Fairport friends and family spin-offs we had Ashley Hutchings’ recreation of Morris On, a stunning solo set from Richard Thompson and original Fairport vocalists, Judy Dyble with her Band of Perfect Strangers and Iain Matthews with Plainsong. Lots of highlights there.

And niggles? With a three day festival and three days of camping and drinking and music we normally choose an act we’re not too bothered about for a bit of early evening down time back at the camp-site. On the Friday, the Trevor Horn Band drew the short straw for us this time. I’ve never been too bothered about either ’80s Yes or Buggles I figured. But sadly it meant missing a surprise guest appearance from Russ Ballard. ‘Since You’ve Been Gone’ (Ballard’s hit for Rainbow) and ‘God Gave Rock n Roll To You’ (the Argent classic). Both sounded great from the comfort of our gazebo anyway…

Marillion sounded good but they did a dedicated fans’ set rather than a festival set. I’ve got my one greatest hits album and was really hoping to hear a few more songs I was familiar with that I could sing along to. To me, Marillion not doing ‘Kayleigh’ at a festival is as daft as Petula Clark not doing ‘Downtown’. Happily the latter obliged. Would I pay to go and see a Petula Clark gig? Probably not. But was singing along to ‘Downtown’ in a field with several thousand others one of those not-to-be-missed life-affirming moments? Absolutely!

While it might not have been my favourite Cropredy line-up ever, it was definitely, without a doubt my favourite Fairport performance of all time. Fairport Convention are a band that never knowingly pass over the chance to celebrate an anniversary and they certainly pulled out all the stops for this one.

Things began with a couple of songs from the modern-day Fairport and then suddenly, magically we were transported back to 1967 with all of the surviving members from the first album reconvening on stage for a stunning recreation of the first track on the first album ‘Time Will Show The Wiser’, followed by ‘I Don’t Know Where I Stand’ and ‘Reno, Nevada’. It completely captured the magic of that first album and was really special seeing Ashley Hutchings, Simon Nicol, Richard Thompson, Judy Dyble and Iain Matthews sharing a stage together. When early Fairport reconvene like this I am always reminded of when groups of old school friends get together they often seem to slot back into the roles and pecking orders of decades ago. Even though he has not been a member of the band for 48 years, Ashley Hutchings effortlessly slots back into the role of band leader, doing all the talking and introducing the songs.

Tragically, it is now increasingly challenging to reconvene some of the later later line-ups of the band and more and more stand-ins are required. Nevertheless, Chris While does a superb job filling in for Sandy Denny and likewise Chris Leslie for Dave Swarbrick’s fiddle parts, in renditions from the iconic Liege & Lief album. Songs from other classic albums Full House, Nine and Rising From The Moon (with Sally Barker on vocals) also get a good airing.

The set-list is heavily weighted towards the band’s first eight years or so, with only a smattering of songs from later eras but considering Fairport’s outstanding legacy of truly groundbreaking from this period that seems entirely appropriate.

Having seen Fairport Convention on stage some twenty-five times now and never once failing to enjoy them, for me this has easily been the best. A stunning way to celebrate fifty years.

Fairport Convention set-list:
Bottom of the Punchbowl / East Neuke of Fife / Ye Mariners All
Summer By The Cherwell
Time Will Show the Wiser
I Don’t Know Where I Stand
Reno Nevada
Suzanne
Farewell, Farewell
Crazy Man Michael
Come All Ye
The Deserter
The Lark in the Morning Medley
Tam Lin
Walk Awhile
Poor Will and the Jolly Hangman
Sloth
Now Be Thankful
Sir Patrick Spens
Fotheringay
The Ballad of Ned Kelly
Talk About Money
Rising for the Moon
White Dress
A Surfeit of Lampreys
The Hiring Fair
The Hexhamshire Lass
Jewel in the Crown
Who Knows Where the Time Goes?
Our Bus Rolls On
Dirty Linen
Matty Groves
Meet on the Ledge 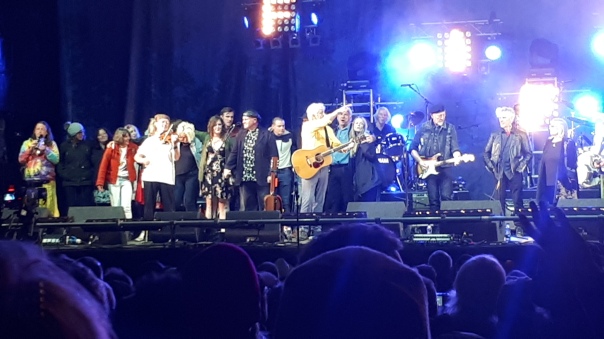