Richard Thompson is rightly ranked as one of the world’s greatest guitarists and is also recognised as an outstanding songwriter. There is no mystery behind the title of his latest CD. Acoustic Classics does exactly what it says on the tin, offering acoustic recordings of classic Thompson tracks. The question is does anyone with even a passing interest in Richard Thompson really need re-recorded versions of I Want To See the Bright Lights Tonight and 1952 Vincent Black Lightning?

Surprising though it may seem, however, there is no product out there that properly represents Thompson’s latter-day acoustic shows. “I really wanted to have something that would reflect the acoustic shows,” he explains, “But we didn’t really have anything like that. Just some old, slightly scratchy recordings of solo sets that I wasn’t really happy with.”

Listeners will come across a number of re-recorded versions of songs made famous by the renowned Richard & Linda Thompson albums of the 1970s, songs like Walking on a Wire, Down Where the Drunkards Roll and Shoot Out the Lights. Wonderful though those original Richard and Linda recordings are, with their full instrumentation and lush vocals, it is also good to hear those songs stripped back to Thompson’s stunning guitar and mournful voice.

Other songs on the album come from Thompson’s later solo career but, again, stripped back to the very basics in a way that shows off the beauty of the songs and Thompson’s guitar work, although the aforementioned 1952 Vincent Black Lightening differs little from the un-improvable original. It wouldn’t have been right to have missed out such a classic, however. Some particular personal favourites have been missed out, of course, but it was never going to be possible to get everyone’s favourite Richard Thompson songs on to a 14-track CD.

For anyone catching one of his excellent acoustic shows this summer, who comes away wanting a more permanent reminder, this album is ideal; and for those less familiar with Thompson’s voluminous back catalogue this is a pretty good introduction. 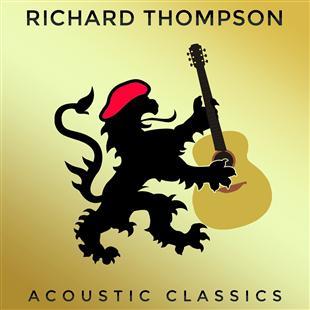 Richard Thompson live at Folk by the Oak

Keeping Up With Victoria Smith

Victoria's blog life and all her latest thoughts about life