Michael Schenker’s career, as well as his personal life, went through an increasingly erratic period a decade or so ago. Having seen Schenker a couple of times in recent years with his Temple Of Rock project, however, it was clear that he has absolutely, undisputably got his shit together again. If more proof was needed, tonight’s gig provides overwhelming evidence of that.

Tonight’s gig, dubbed Michael Schenker Fest, features all three vocalists from the three key eras of MSG: Gary Barden, Graham Bonnet and Robin McAuley. Barden is first up. While I won’t say he is the strongest of the three vocalists who will appear on stage tonight this is undeniably my favourite era of the band and the classic songs come thick and fast, transporting me back to my teenage rock fan years: Victim Of Illusion, Cry For The Nations, Armed And Ready….

Schenker is on stunningly good form with some stunningly good guitar work coming from his signature Flying V. On stage there’s other familiar faces from the old MSG days, too: Chris Glenn on bass, Ted McKenna on drums and Steve Mann on keyboards.

Next up is Graham Bonnet and while I have heard him struggle a bit at times during previous gigs he is definitely on form tonight. Originally recording one excellent album with MSG and playing just one disastrous gig where he drunkenly flashed the audience and promptly got sacked, much water has passed under the bridge since then. It feels a privilege to witness Bonnet perform Dancer and Assault Attack with Schenker and properly celebrate the part he played in MSG’s legacy. Even the sound system crashing in the early part of Bonnet’s set didn’t dampen the mood (and allowed me a much-needed loo break!)

Then it is the turn of the third of tonight’s vocalists. Robin McCauley is easily the strongest of the three singers tonight. Although set-wise, the earlier songs probably have far more resonance for me than the McAuley Schenker era, he certainly doesn’t disappoint tonight. To end the set he delivers a brilliant rendition of Rock Bottom from Schenker’s UFO days.

That sets the tone for a brilliant out-of-this-world encore which becomes a complete and utter UFO-fest. McCauley, Bonnet and Barden all come back on stage for Doctor Doctor, followed by Shoot Shoot, Natural Thing (with Schenker’s son Tyson joining his father on guitar) and, finally, Lights Out.

Three great vocalists, a brilliant gifted guitarist, some top class musicians and song after song of unforgettable rock classics, this was definitely one of the best hard rock gigs of 2017. 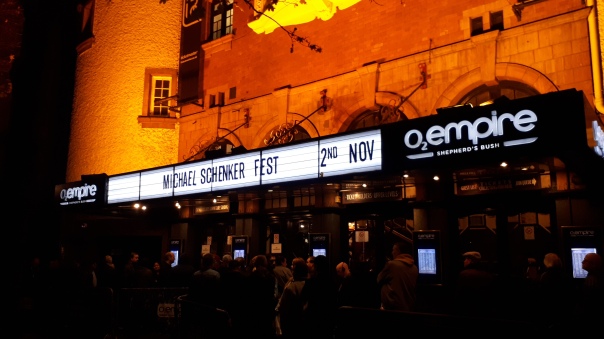 The evening kicked off with excellent support from Michael Schenker’s Temple of Rock. And Schenker clearly understood the golden rule of being an effective support act: unlike the headliners that everyone has paid to see, hit the crowd between the eyes with your best song first – don’t save it ’til the end! So we begin the night with a cracking version of Doctor Doctor. It couldn’t have been a better start to the evening in an absolutely jam-packed Brixton Academy.

I first discovered Judas Priest as a teenager back in the early 80s not long after British Steel came out and the band can still be heard regularly blasting out from my speakers. But as a gay heavy metal fan I can’t also fail to mention my personal admiration for lead singer Rob Halford. In a genre that always seemed so resolutely heterosexual, Halford’s decision to be open about being gay back in 1998 was a big moment both for him personally and for heavy metal generally. Seeing his total command of an adoring crowd tonight it’s hard to believe that Halford’s sexuality could ever even have been an issue. But there must be many a teenage rock fan across the globe who can personally thank Rob Halford for demonstrating so visibly that, yes, it’s ok to be both gay and like heavy metal. Cheers Rob.

Halford is not a frontman who goes for a lot of between-song chat and audience banter but, boy, does he know how to work a crowd: mass chanting, crowd sing-alongs, every stage movement eliciting a multitude of fists in the air and more costume changes than Elton John, Halford knows how to squeeze every last drop of adulation from an audience. His vocal range is as wide and as powerful as it always was. He growls the lowest of the low notes and howls the highest of the high notes just as he always did. It’s a performance of utter brilliance in every respect, as is that of the whole band. The unmistakeable twin lead guitars are as powerful as ever, with Glen Tipton being joined by new guitarist Richie Falkner (who replaced Priest veteran, KK Downing, in 2011).

And let’s not forget the songs of course. They deliver a great mix of songs representing different eras of the band’s history, the relevant album cover for each song flashing up on the giant screens on stage beforehand, fuelling anticipation of what might be coming next. We get some new songs from last year’s album, Redeemer of Souls, of course – the first with new guitarist, Falkner. But as we move through the hour-and-a-half set, more and more of the unforgettable classics of the 80s emerge: Breaking The Law, Hell Bent for Leather, You’ve Got Another Thing Comin’.

Soon we are nearing to a close, however, with the crowd going wild to a high-octane version of Painkiller and a brilliant sing-along Living After Midnight. Always metal. Always Loud. Never just noise. Judas Priest are still on form and are truly still the Metal Gods.

Your Home for Vintage Leisure

londonmusictours.wordpress.com/
Rock Is The New Roll

The Home of all Things Rock and Sometimes Roll.