“It’s quite overwhelming having all these people singing these songs back at us,” lead singer, Gary Moffat, tells the audience at the Carlisle at one point during tonight’s gig. Clearly, the Kent-based hard rock outfit, Slam Cartel, have something of a following in Hastings and they have made regular appearances at the Carlisle in recent years. However, regardless of how many times gigs you perform, it’s not every lesser-known band producing wholly original material that is rewarded with impromptu crowd sing-alongs throughout the night. It just goes to emphasise the sheer quality of this band’s song-writing. Or, as one of their enthusiastic supporters told me afterwards, “What I like about these lads is that they really know how to write a good chorus.”

With a hard n heavy yet infectiously melodic approach, a charismatic and energetic front-man in Gary Moffat and, as mentioned, a superb set of songs, Slam Cartel are thoroughly deserving of the response they got tonight.

Combining the irresistible hook-lines of 80s metal with the down-at-heel honesty of grunge and the attachment to melody that every great classic rock band has always aspired to, Slam Cartel have created a distinctive sound and a musical identity for themselves that they carry off with self-confidence.

Songs from the band’s début album Handful Of Dreams (released prior to Moffat joining the band) dominate the set-list. Given it contains great catchy rock songs like Powerstorm, Wishing Eye and Once In A Lifetime, it would make no sense at all for the band to turn their back on these, particularly as Moffat has absolutely made them his own in terms of delivery. Songs from two more recently-recorded singles, however, also make it into the set including the superb Vanishing Worlds.

With the reception they got in the Carlisle, once again, I’m sure it won’t be too long before Hastings is treated to another energetic night with Slam Cartel. In the meantime, there’s also a new album to look forward to, currently being recorded and due out later this year.

Radio-friendly, melodic hard rock that is fresh and contemporary, yet at the same time gets you singing along like you’ve known the stuff for years, it’s immediately apparent why gig-goers in Hastings have taken this band to heart. Let’s hope the rest of the rock world soon follows suite.

“It’s as rough as hell but the rock nights are good fun,” the woman in the cab office tells me as I wait to get taken to the Red Lion. Buried away in an industrial estate along Gravesend’s river frontage, it’s a traditional boozer with a large, cavernous old-fashioned function room that’s been given a makeover as a rock venue and a decent-sized stage put in.

The event is billed as 3G and features three bands. First up are young Kent-based band Salvation Jayne (an all-female line-up save the bass player) who instantly channel the vibe of early 70s Humble Pie with covers of Black Coffee and I Don’t Need No Doctor. Great stuff. Next up is modern blues band Big River, fronted by Damien Fawsett who put the whole evening together with the aim of showcasing guitar rock.

And then, finally, it’s the turn of Dave “Bucket” Colwell with fine backing from the Big River boys, who take the stage once more. Colwell spent a number of years in Bad Company and that’s very much reflected in the sound and feel of tonight’s set. This is not only due to Colwell’s excellent lead guitar-playing but also because he’s joined on vocals by the superb Adam Barron, who can normally be found doing vocal duties with another Bad Company guitar hero, Mick Ralphs. I’d seen Barron performing with the latter only two weeks ago at the Butlins Giants of Rock weekend. But tonight, not only does he get the chance to let his vocal chords loose on some Bad Company classics like Ready For Love, as well as some Colwell solo material, we also get to hear some Free classics this time, too, with brilliantly-performed versions of The Stealer, Fire & Water and All Right Now.

Not only has Barron been fortunate enough to work with some genuine guitar greats, like Colwell, he’s also got the voice to take the polished but emotive blues rock of the early 70s well into the 21st century. 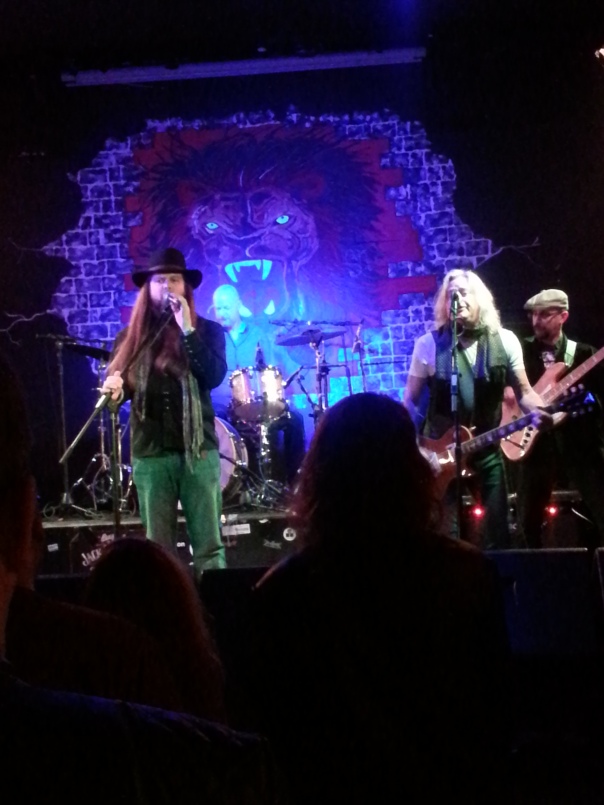 This is a band that had been vaguely on my radar for some time, but a local gig just up the road for me in New Cross provides an easy opportunity to get better acquainted with the driving hard rock of Slam Cartel. And I’m pleased I did.

Formed in 2009 and releasing their debut album in 2011, this is a band that is well worth catching. There are some classic hard rock influences, some Seattle-style grunge influences and a powerful but melodic feel to their overall sound. It works well. Undergoing various line-up changes since their formation the band has now settled down to Gary Moffat (lead vocals), Damo Fawsett (lead guitar), Terence Warville (rhythm guitar), Mark Neudeck (bass) and Steve Campkin (drums).

The New Cross Inn, which I spent many nights in when I was a student over the road at Goldsmiths, has undergone something of a makeover since my student days. The big Victorian circular bar, which dominated half the pub and always made the experience of seeing a band or even the DJ an extremely cramped affair, is no more. This creates a lot more room in the pub. But does mean there’s now a lot more space to fill and, sadly, this Sunday night gig a very sparse affair. The band do not let this dampen their performance though. Charismatic and flamboyant frontman Gary Moffatt performs as if the band are playing to a packed house at the Hammersmith Apollo or taking the stage at Sonisphere. But rather than this all looking rather incongruous and a little ridiculous in a half-empty pub in New Cross, the band carry it off. Incredible energy (and volume!), strong songs, catchy choruses, driving guitars and powerful drumming – this is a band that should be playing to much bigger audiences than those of here tonight.

Opening with the wonderfully infectious Wishing Eye, the opening track of their debut album, they immediately command attention with a song that gets you enthusiastically nodding along as if you’ve known it for years.  Other songs in the set like Free Again and Vanishing Worlds exemplify that same energy. Lead vocalist Moffat picks up a semi acoustic guitar for the slower and more atmospheric Breathe, which is followed by an airing for the bands great new single Hypnotised. Less raw with more of a commercial feel it’s a good showcase for hopefully bringing the band to the attention of a wider audience. After a minor technical hiccup the set is finished off with another track from the original album, Sundown.

Although a disappointing turnout this was a great gig with incredible energy and the band are now firmly on my radar.

Weekly suspense serials and other literary snippets. Don't forget to support by following!