Blackbeard’s Tea Party, who have set many festivals alight with their folk-rock inspired blend of nautical madness, celebrate their tenth anniversary this year. I first caught them about seven years ago not long after the charismatic Stuart Giddens had taken over as lead singer. They immediately appealed, not least because they got the crowd singing along to ‘Tomorrow We’ll Be Sober’ a song I was taught at primary school. Back in 1975 for some reason this was deemed the perfect song to introduce a bunch of 9 year-olds to folk music, but I still know all the words! Since that memorable first time I’ve caught Blackbeard’s Tea Party on a number of occasions – from absolutely storming Fairport Convention’s Cropredy festival to packing out my former south London local in New Cross.

The band celebrate their tenth birthday with a lengthy autumn-winter anniversary tour and a special re-release of their best-known single, ‘Chicken On A Raft’.

Front man and chief rabble rouser, Stuart Giddens, says: “It’s not every day your band
makes it to ten years. We’re so pleased that we’re still here, playing gigs and festivals, getting people dancing. It’s a difficult business, especially for a band that plays the kind of music we do, so we’re delighted at the generosity and support of our fans.”

“We’ve had some brilliant moments in the band over the last ten years. At Cropredy in 2014, we were voted “best band” and the queue for our merch had to be moved because it was too long! In fact, 2014 was a particularly good year, as that was the year we were invited to perform at the Rainforest World Music Festival in Borneo – an incredible experience!”

Cheers Blackbeard’s and here’s to another ten years.

Raucous sounds, catchy tunes, dark lyrics and a whole lot of fun, Blackbeard’s Tea Party have been making a splash on the folk scene for some time now.

As well as loud electric guitar from Martin Coumbe and pumping electric bass from Tim Yates, what really makes this folk act rock is the presence of powerful duel percussionists, Liam “Yom” Hardy and Dave Boston, making Blackbeards’s Tea Party kind of the folk world’s answer to the Glitter Band. Laura Boston-Barber provides spiky, tuneful fiddle playing throughout. Stuart Giddens on lead vocals and melodeon was not the original singer but he’s been with the band several years now and his vocal delivery and hyperactive stage presence have meant he’s truly made the role his own, such that it would be difficult imagining anyone else filling it.

They’ve got a new album to promote “Reprobates” – featuring songs about a range of characters who are all engaged in activities that are either “illegal, immoral or ungodly” explains Giddens with a fair degree of relish. It’s literally just out in time for this gig so we get to hear a a selection of new song, like album opener The Steam Arm Man – about a soldier who loses an arm at Waterloo, builds himself a replacement which unfortunately turns haunted and takes him on a murderous rampage.

We do get a few old crowd favourites as well, such as the sing-along-and-do-the-actions-Agadoo-style Chicken On a Raft (it’s based on an old saying about sailors’ rations I understand and not “Chicken in a Wrap” as numerous of my friends have innocently sung while watching the band.) 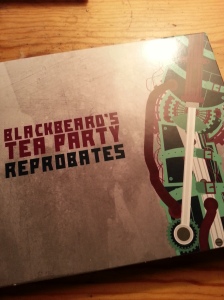 Blackbeard’s Tea Party, a young band from York, play a fantastically lively kind of folk. Fun, loud and with bags of energy I’ve seen them go down particularly well as a late night attraction in far smaller venues. But how would they fare on a Saturday lunchtime playing to an audience of 20,000, which as lead vocalist, Stuart Giddens, told the crowd is at least ten times the size of anything they’ve played to before? Well, the Cropredy audience responded brilliantly and they went down a storm. Proof of that was the massive queue for the band’s CD signing session after their set, which snaked around the festival. And when the Tea Partiers over-ran their scheduled signing slot they, along with their queue of newly-enraptured fans, decamped to a spot by the bins where they carried on meeting, greeting and signing throughout the afternoon. Although they are now seasoned festival performers and this year played one of the small stages at Glastonbury, I hope that reaching this many people is the start of something bigger for them.

The combination of loud electric guitar and pumping bass lines, together with manic but beautiful fiddle sounds from Laura Boston-Barber, creates a hugely energetic brand of modern folk-rock. Stuart Giddens, who jumps up and down like the campest boy-band wannabe but has a commanding and powerful voice, is a perfect fit for the band. His vocals and his infectiously enthusiastic stage presence have really brought something to the band. They played a number of songs from their latest album, 2013’s “Whip Jamboree” as well as material from their two previous albums, recorded before Giddens joined. A particular favourite of mine was the traditional song, Landlord, an epic tale of drinking drunkenness, which for some bizarre reason I remember being taught at primary school and still remember all the words. Mid-70s education was so much fun at times.