Peter Knight will be known to many as fiddle supremo for folk rockers, Steeleye Span, over four decades. The Gigspanner trio initially began as a side project of Knight’s but he left Steeleye Span for good in 2013 to concentrate fully on Gigspanner. While there are numerous cases of artists carrying on doing exactly the same old thing as they’ve always done in a brand new band with a similar sounding name, this is far from the case with Gigspanner. Of course, Knight’s virtuoso fiddle playing is still at the heart of Gigspanner’s sound; but rather than the typical ingredients of the classic folk-rock band, Gigspanner is a complete melting pot of musical influences: English folk meets Cajun hoe-down meets French waltzes meets Latin-American drumming and much more besides. All of it producing a magically diverse texture of sounds that is awe-inspiring and utterly enthralling.

The band has performed at the old town’s Stables Theatre on a number of occasions now and seasoned Gigspanner followers will have immediately noticed a change as soon as they walked into the auditorium and seen a different percussion set-up as they glanced towards the stage. Indeed, conga drummer Vincent Salzfaas who had been with the band since its formation recently departed due to changes in his personal circumstances and he’s been replaced by Sasha Trochet. Salzfaas’s congas were such an integral part of the unique Gigspanner sound I was wondering what impact the new arrangements would have. Fans of the trio have nothing to fear. While Trochet introduces a much more varied selection of percussion instruments the essential ingredients of the Gigspanner sound are still there and are added to, rather than diluted.

The band have strong Hastings connections, of course. Knight was resident here for many years and a familiar figure in music pubs around the town. Guitarist, Roger Flack, is Hastings-based and also plays with local band The Tabs, as well as being a regular participant in folk sessions in the Dolphin. A Hastings gig, therefore, always has something of a home-coming feel for the trio, particularly as a number of the band’s songs are directly inspired by the town. ‘Seagull’, for example, one of the songs written by Knight that is performed tonight, was inspired by regular sessions of shove ha’penny in the Lord Nelson. It’s also noteworthy for being one of the songs that Knight plays the fiddle, not with a bow, but by plucking. Just as the fiddle supremo produces a whole range of beautiful sounds using his bow, there’s a whole set of other sonic delights that come from his fingers, too. Other songs include traditional folk staples like ‘She Moves Through The Fair’ and ‘Raggle Taggle Gypsy’ reworked to give them that unique signature Gigspanner feel.

As the evening draws to a close, once again the Stables audience respond with rapturous applause and once again, Hastings can be immensely proud of a music scene that has played a part in gifting the world a band of this calibre. 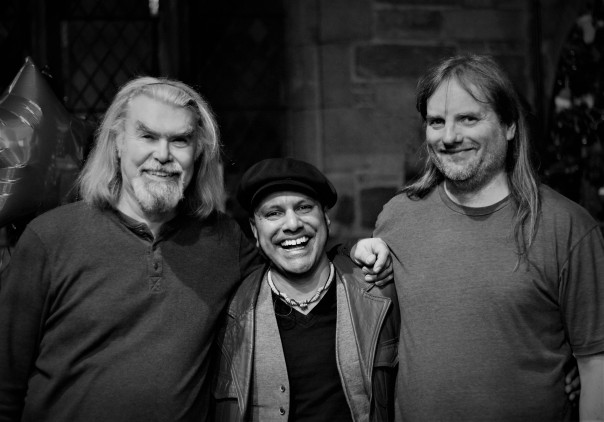