Cecil Sharp House’s 2015 programme of concerts continues to excel with a cracking performance from Mawkin. Formed in 2002 as a three-piece, Mawkn evolved into a five-piece band offering a rousing brand of folk-rock.

The set is heavily dominated by material from their great new album The Ties That Bind, released in July. And they deliver us a nice mix of traditional English tunes and songs, some original compositions as well as the odd little nuggets from America and Sweden. Unlike some folk acts who feel compelled to unearth out ever more obscure traditional songs, Mawkin don’t shy away from performing some really well known traditional material, songs like Birds Upon a Tree, which they got everyone singing along to, and Searching for Lambs, both of which appear on their new album.

Vocals are shared between guitarist David Delarre, who takes the bulk of the singing duties, and his brother (and the band’s hugely talented fiddle-player) James. The latter I wouldn’t have minded hearing a little bit more of. He has a really engaging vocal delivery – a sort of 90s indie meets English folk. The musicianship is superb, particularly the interplay on stage between fiddler, James Delarre, and melodeon player, Nick Cooke. At one point, the rest of the band leave the stage while these two let rip on a couple of instrumentals.

While many of the rockier contemporary folk acts have gone for the box-style cajun percussion rather than drums these days, Lee Richardson unashamedly plumps for the full drum kit. And not only does he use it to make some of the faster folk numbers really rock, he also creates some spookily atmospheric soundscapes with it. At times he reminded me of Martin Lamble’s playing on Fairport’s “A Sailors Life” – the track that started off the whole drums-on-English-folk-songs thing back in the late 60s.

Mawkin have been making music for well over a decade now and while there probably weren’t more than thirty people here tonight, the noise the audience made in showing their appreciation was testimony to just how well this band was received. Deservedly so. 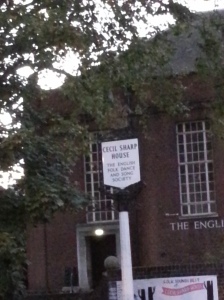