My article was originally published by The Stinger here

When he arrived at 7.30am they were snaking around the block confirms Richard, one of the co-owners (along with his business partner Del) of Music’s Not Dead. Bexhill’s independent record store was set for another busy Record Store Day. 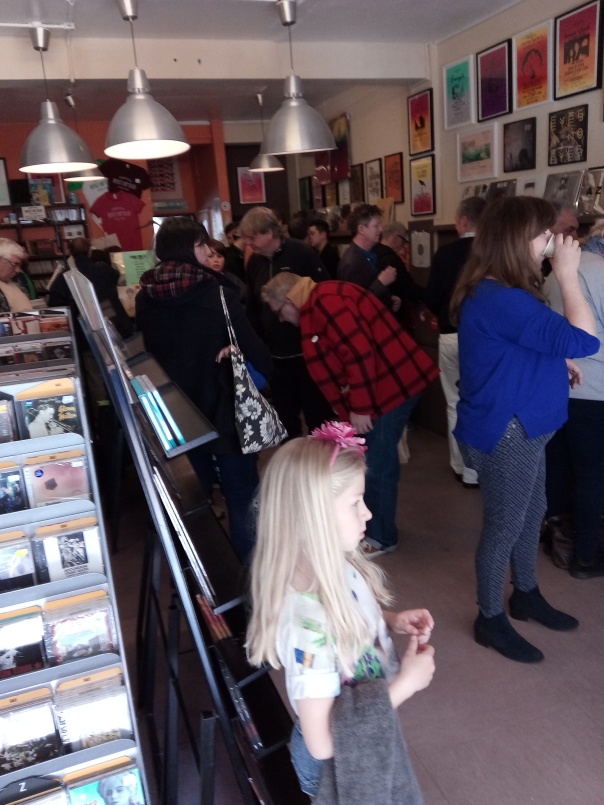 Going some ten years now, with the aim of championing the nation’s remaining independent record stores, Record Store Day has been coming in for a fair bit of stick in recent years. Record companies release a load of limited edition vinyl while punters out to make a fast buck snap it up first thing and then sell it on at vastly inflated prices on ebay later that day. The whole thing is little more than a cynical exercise in profiteering, so the argument goes.

The reality, however, is quite different maintains Richard when I catch up with him during a temporary lull,”There’s always one or two in the queue like that, and you know who they here, but the vast, vast majority are here because they want to buy a record from an artist whose music they love.” He is also keen to stress that it has helped them gain loyal customers who proceed to then come in throughout the year – which was the main motivation for the whole initiative in the first place.

So, in spite of some of the press cynicism, at Music’s Not Dead they are wholehearted champions of Record Store Day and are happily shifting 1,000 units of special limited edition releases to purchasers who are in the main real, genuine fans.

Personally, however, I would no more queue up at a record shop at 7.00am in the morning than I would camp out overnight to buy a cheap sofa in the Boxing Day sales. And while I’ve been a happy participant in numerous Record Store Days, my purchases in recent years have included a second-hand Status Quo Live CD, a stack of half price Blur CDs and the most recent Santana album in bog-standard format, hardly exclusive limited editions any of them. But there is far, far more to Record Store Day than queuing up for limited edition vinyl, a point Richard is keen to stress as I make my way in to Music’s Not Dead around mid-day shortly before the programme of live acts kicks off. “We don’t want it to be just about us filling the till all day. It is also about us giving something back to the community and supporting artists.” 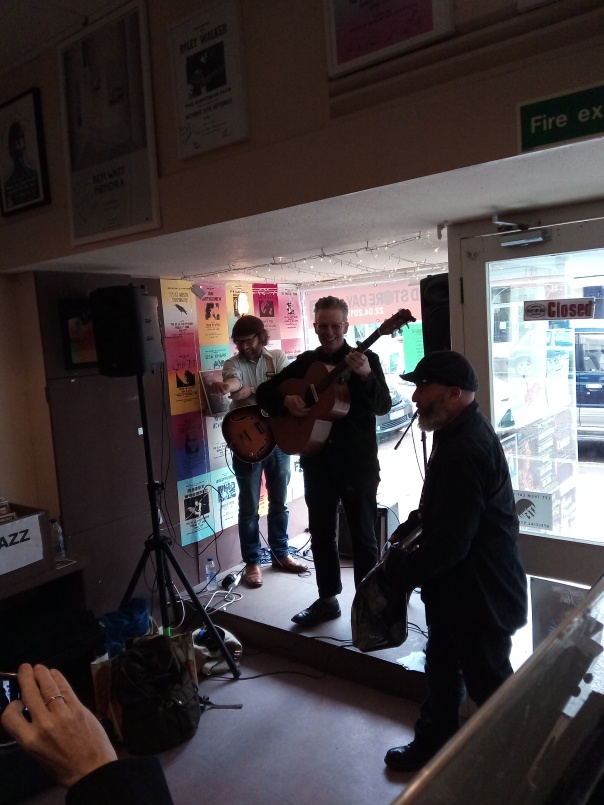 Trevor Moss who performed as half of Moss & Clarkson today remains an enthusiastic supporter of Record Store Day. As well as the fun of performing he sees it playing a small but significant redistributive role for “the poorer end of the music industry,” as he puts it, whether shops, labels or performers. “We know about some of the things that go on. But on the whole all the people we come across are here because they’re sincere,” he enthuses to me after his well-received performance.

By late afternoon the sun had come out and was shining brightly through the shop windows, parents and their kids lounged about on the floor soaking in the ambience, Jason McNiff gave a lovely laid-back set and somehow it all began to take on the vibe of a very, very minature summer festival.

Emily Barker, the final act of the day, gave an utterly stunning set with selections from her new album recorded in Memphis, including an incredible tribute to Sister Rosetta Tharpe. She’s appeared on the small shop-window stage at Music’s Not Dead some half a dozen times now and is also an enthusiastic champion of Record Store Day. She had already performed sets in stores at both Portsmouth and Lewes before turning up in Bexhill. “I had to leave Stroud at 5am this morning. I’ve had four hours sleep but the minute I got in the car and started up the engine this morning I was excited about Record Store Day.”

Certainly the view from where I was standing at Music’s Not Dead was that it was about celebrating independents – labels, stores and artists, it was about a genuine community event and it was definitely very much all about the love of the music.

And today’s purchase? The very unlimited and non-exclusive edition of the new Fairport Convention CD for a tenner – but with cakes, live music and friendly company thrown in for free. You don’t get that at Amazon.