The Bowie-inspired supergroup Holy Holy, featuring original Spider from Mars Woody Woodmansey and David Bowie collaborator and legendary producer Tony Visconti, first got together in 2014 when they toured Bowie’s groundbreaking The Man Who Sold The World album in full, which both men played on. This was followed with a 2017 tour playing The Rise And Fall Of Ziggy Stardust And The Spiders From Mars in full. Now, in 2019, Holy Holy are back with another tour performing not one, but both of these legendary albums in full, back-to-back. Bexhill’s De La Warr is absolutely packed out for an evening of Bowie worship. Fronted by Heaven 17’s Glenn Gregory, Woodmansey and Visconti are joined by James Stevenson and Paul Cuddeford on guitar, Berenice Scott on keyboards and Jessica Lee Morgan on saxophone, guitar and additional vocals.

Beginning with The Man Who Sold The World set, the heaviest of Bowie’s early 70s albums, the band don’t hold back on songs like the doom-laden All The Madmen and The Supermen as well as the lighter but no less brooding ‘After All’, not to mention a majestic rendition of the album’s title track. As I observed on a previous tour, Gregory is a powerful singer and great performer who does a nice line in Bowiesque vocals but without ever descending into play-acting or parody. Although the venue is all-seated tonight, many in the crowd don’t need much encouragement at all from Gregory when he says they are welcome to make their way to the front (even if the venue management appear to take a slightly different view).

If the atmosphere for the moody, dark proto-goth vibes of The Man Who Sold The World is reverential when the band switch to performing Ziggy Stardust, however, it’s one of unadulterated, joyous celebration. This is exactly as it should be for one of the truly classic albums of the second-half of the twentieth century. From ‘Five Years’ (track 1 side one on the original vinyl) through to ‘Rock n Roll Suicide’ (track 6, side 2) the classic songs keep rolling one after another, each one greeted with tumultuous, affectionate, thunderous applause.

Yes, those on stage didn’t write these songs and (in the majority of cases) weren’t the ones to originally perform them. Their creator, together with two of his three Spiders From Mars band-mates, is no longer with us. And yet, and yet… this is very much a band, not a disparate collection of musicians and competing egos coming together to reel off a tribute, but a band – one that has genuinely gelled musically, one that works the stage together and one that laps up the love shown by tonight’s audience. Everything about this performance screams out that this is something special, that this is something way beyond the myriad of Bowie tributes that can be found up and down the country.

The encore sees a surprise rendition of Bowie’s 2013 hit ‘Where Are We Now’, something the band only hit on part way through the current tour, Gregory tells us. That’s followed by a triumphant ‘Life On Mars’, a superbly energetic’Changes’ and a gloriously raucous ‘Rebel Rebel’.

Where Are We Now
Life On Mars
Changes
Rebel Rebel 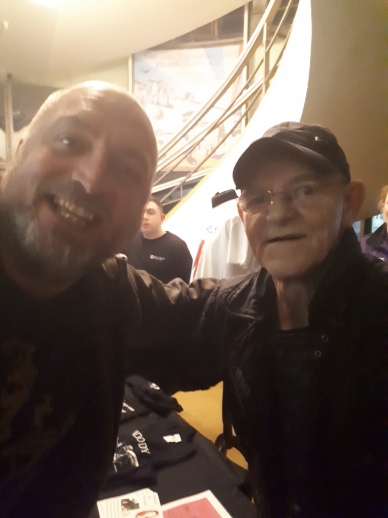 Wishing you a happy New Year and thanks to everyone who has visited Darren’s music blog during 2017. Here are the top ten most popular posts from the year, with the highest number of visits:

1. The Sweet versus Bowie: the riff in Blockbuster and Jean Genie – origins and influences: actually written in late 2016 but consistently the most popular post throughout the year. Here I trace the origin of that famous riff – back through the glam era, the Yardbirds and those blues masters. Full post here.

2. Stone Roses at Wembley Stadium: “From the moment they first walk on stage to play ‘I Wanna Be Adored’ to the last climatic strains of ‘I Am The Resurrection’ the whole show is pretty much a celebration of that unforgettable and seemingly unrepeatable debut album.” Full review here.

4. In praise of the CD: It was only a few years ago that people were finding it hilarious that I was clinging obstinately to the CD rather than embracing digital formats. Now, with the renaissance of vinyl, some still regard me as a Luddite dinosaur for not embracing the switch back to the 12 inch. Here I gave seven reasons why the CD is king for me. Full article here.

5. For One Night Only – Slade’s Jim Lea in Bilston: “We had been warned not to expect a live performance. But he certainly gave us one, and not some gentle, reflective, soul-searching, acoustic reinterpretation but a full-on, amped-up, raucous rock performance that so perfectly captured the spirit of Slade.” Full review here.

6. Sweet in London & Bilston: “This is a small venue with a tiny stage and it was absolutely rammed but the atmosphere was electric. It was evident that the band were also getting a huge buzz from playing to such a responsive audience, too.” Full review here.

8. Hastings Fat Tuesday 2017: my preview piece ahead of Hastings’ annual Fat Tuesday (Mardi Gras) celebrations with many, many dozens of gigs across the town was shared widely. Full article here.

9. Holy Holy perform Ziggy Stardust at Shepherd’s Bush Empire: “Holy Holy shows a way forward as to how we can continue to enjoy some of the greatest music of the twentieth century well into the twenty-first. A genuinely and truly impressive gig.” Full review here.

10. W.A.S.P. at White Rock Theatre, Hastings: “The Crimson Idol tells the story of a boy Jonathan and explores themes of estrangement, drugs, fame, money and suicide. It has become something of a cult heavy metal album and, twenty-five years since it was originally released, Lawless and his band are touring it in full.” Full review here.

Thanks for visiting Darren’s music blog everyone. Thanks also to publications like Get Ready Rock, the Hastings Independent, The Stinger, fRoots Magazine, Bright Young Folk and the Hastings Online Time for running many of my reviews and articles.

“He’s fucking sacked us,” Spiders bass player, Trevor Bolder, was seen to mouth when David Bowie announced at the Hammersmith Odeon in October 1973 that it would be the final Ziggy show ever. Tragically, like Bowie, Bolder and his former Spiders colleague Mick Ronson are no longer with us. However, three years ago Spiders drummer, Woody Woodmansey, teamed up with long-term Bowie collaborator, Tony Visconti, to tour The Man Who Sold The World, an album that both played on. Now their Holy Holy outfit have done the seemingly impossible and resurrected Ziggy and the Spiders, forty-odd years after Bowie declared it would be the last show they would ever do.

Would they pull it off? I was certainly keen find out. Much as I wholeheartedly agreed with all of the tributes last year about what a truly unique, talented and infuential presence Bowie was throughout his entire career, for me it was always the early 70s glam rock period of Bowie’s work that I was truly, unequivocally a 100% fan of.

Starting out with The Width Of A Circle from The Man Who Sold The World, the seven-piece band go on to perform the Ziggy Stardust album in full, treating the crowd to blinding versions of Starman, Ziggy, Suffragette City and all the other gems from that iconic album. Once the final song of the album Rock n Roll Suicide plays out they give us to a spectacular run-through of other Bowie classics including Changes, Life On Mars and Space Oddity.

Heaven 17’s Glenn Gregory delivers superb Bowie-esque vocals with the familiar phrasing that we all know and love from the records, while at the same time avoiding descending into a “Tonight Matthew I’m going to be…” pastiche. Post-punk icon James Stevenson absolutely nails the Ronson guitar licks in what is a talented band of world-class musicians. And, of course, it goes without saying that Woody Woodmansey is still an exceptionally talented drummer. The outpouring of affection for him throughout the night is thoroughly deserved.

The capacity crowd sing along to every word and the whole thing is joyful and celebratory. As we inevitably lose more and more of our twentieth century rock icons it becomes more and more apparent that we continue to have a tremendous yearning to still hear the music they made being performed live. We are no more going to forget Life On Mars in fifty years time than we have forgotten A Wonderful World almost fifty years after the death of Louis Armstrong. The challenge is to find an appropriate way of continuing to celebrate such music in a live setting. Holy Holy perhaps provides the template. They don’t claim to be the original band, although they’ve got a living, breathing direct link to it in the form of Woodmansey. They are not a tribute act, in that they avoid the role-playing and dressing up which can risk turning contemporary live performances into the musical equivalents of historical re-enactment societies. They do, however, pay tribute to the music in a way that is accurate and authentic and which delivers the songs with great love, care and affection.

In short, Holy Holy shows a way forward as to how we can continue to enjoy some of the greatest music of the twentieth century well into the twenty-first. A genuinely and truly impressive gig.

Related:
The Sweet versus Bowie: the riff in Blockbuster and Jean Genie – origins and influences here