In January 1973 at the height of the glam rock craze, two singles with instantly memorable but remarkably similar riffs were both enjoying chart success: The Sweet’s ‘Blockbuster!’ and David Bowie’s ‘The  Jean Genie’, each released by RCA records. Which came first? Were they both dreamt up independently? Did one copy off the other? Or did they both draw on influences from somewhere else? 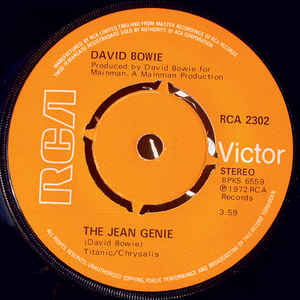 In the folk world songs have always been adapted, evolved and passed on. In the rock world that sort of behaviour is more likely to get you involved in lengthy court cases and costly lawsuits. But in folk there has been over a century of legitimate and rigorous study looking into the often murky origins of traditional songs and tunes. A simple question therefore is: can the principles of studying folk in determining song origins also be applied to glam rock?

We start with the song ‘Blockbuster!’ written by The Sweet’s then songwriting team of Mike Chapman and Nicky Chinn, recorded on 1st November 1972 in London and released in January 1973. In Dave Thompson’s Sweet biography ‘Block Buster’, The Sweet’s Steve Priest recalls Chapman playing his idea for a new song on an acoustic guitar while they were backstage at the BBC waiting to go on Top Of The Pops to perform ‘Wig Wam Bam’ (most likely their appearance on 14th September 1972).

The riff was remarkably similar to David Bowie’s ‘The Jean Genie’ recorded on 6th October 1972, released in November 1972 and in the charts at the same time. “While en route to Tennessee, ‘The Jean Genie’ was developed from an impromptu tour bus jam,” in September 1972 recounts the Mick Ronson biography, ‘The Spider With The Platinum Hair’ by Weird & Gilly. This would have been just prior to the band’s gig in Memphis which is recorded as taking place on 24th September 1972, several days after Mike Chapman strummed the riff for Blockbuster to Steve Priest on the other side of the Atlantic.

Both sides have always denied copying one another and given both ‘Blockbuster’ and ‘The Jean Genie’ were recorded and released around the same time it seems unlikely that either would have had time to secretly copy the other, then get it recorded and released, all within the confines of the same record company, RCA.

What is far more likely is that they were both influenced by the Yardbirds’ 1965 hit ‘I’m a Man’.

Alwyn Turner’s website Glitter Suits & Platform Boots quotes The Sweet’s Andy Scott as follows: “And then, you wouldn’t believe this, before our release we were in the office of the guy who was our contact at RCA and he played us the new David Bowie record, he played us ‘Jean Genie’. And I went, ‘That’s the same guitar riff,’ and he went, ‘Is it?’ This is a record company guy and I’m saying, ‘Haven’t you noticed?’ And he went, ‘No.’ I was horrified, I was thinking: that’s coming out first, and we’re coming out a week behind it, on the same label, it’s got the same guitar riff. I said: well, we don’t stand a chance of being #1. That was my thought. And within three weeks we were #1 and he was #2. I’ve since spoken to Trevor Bolder, the bass-player, and he said, ‘Remember “I’m A Man”?”

Here is that Yardbirds’ version of ‘I’m A Man’.

Interestingly, Iggy Pop and The Stooges also recorded a version of ‘I’m A Man’ during the sessions for the Raw Power album in early 1972. Bowie was involved in remixing this album and although ‘I’m A Man’ doesn’t appear on the album, he would certainly have been familiar with the Stooges cover version. Could this have had an influence on Bowie’s ‘The Jean Genie’ later that year?

We can hear Iggy & The Stooges version of ‘I’m A Man’ here.

Both recordings are, of course, cover versions of a 1955 original version of ‘I’m A Man’ by Bo Didley.

But it’s worth specifically going back to that Bo Didley tune. The riff in ‘I’m a Man’ is significantly changed from that played by Muddy Waters in Dixon’s ‘I’m A Man’. Didley has adapted the tune as a simple repetitive four note riff repeated throughout the entire song, making it notably different.

So although it was influenced by an earlier blues song I think we can safely say that the riff that appears in ‘Blockbuster!’ and ‘Jean Genie’ first emerged in a Bo Didley song in 1955.

Postscript:
Another fascinating release from the 60s that could have played an influential role in the later 70s glam releases was Mickie Most’s 1964 version of ‘Money Honey’.

Unlike earlier versions of Money Honey by Elvis and previously The Drifters, the Mickie Most version utilises that same Bo Didley riff. Most would go on to be a towering figure in glam rock as mentor and producer for Suzi Quatro and as RAK Records boss, home to the likes of Quatro and Mud. He knew Mike Chapman very well and could have helped plant some of the creative seeds for that Blockbuster riff, further strengthening those glam rock links back to blues history.

Links and thanks:
Some great background info and quotes here, http://www.alwynwturner.com/glitter/sweet.html

Before glam: the debut 60s singles of Bowie, Bolan, Slade, Mud and Sweet

Slade, strikes and the three-day week: the story of the greatest Christmas record ever made

Promoting Music & The Arts in York & Beyond

Naijaboombox.home.blog the home of Entertainment. Where true Talents reside!.