Rather than another biography giving an overview of the various glam acts of the 1970s ‘Look Wot They Dun’ is basically an encyclopedic directory that methodically lists all the TV appearances of numerous bands associated with the glam era throughout the 70s. Fifty different acts are covered in all, with the appearances for each in turn listed chronologically.

As much as I am fascinated by this era and as much as I will always love bands like Sweet and Slade and T. Rex, I must admit when I first picked up this book I wasn’t sure whether there would be enough in it to sustain my interest across a whopping 286 pages. However, I soon began to get engrossed, reading some of the fascinating little snippets and insights that accompany many of the entries. In one of his earliest TV appearances, Elton John, for example, is wearing “a horrible outfit of faded blue jeans, a long-sleeved orange T-shirt and a sleeveless striped cardigan” prior to the emergence of the flamboyantly-dressed larger-than-life character of later appearances. The Sweet’s Andy Scott had a run of appearances on Opportunity Knocks in late 1966 in an outfit called The Silverstone Set, we learn, several years before finding fame with the glam rockers. And Mud’s first TV appearance, back in 1968, is on the Basil Brush Show while David Essex’s first appears some two years earlier on the Five O’clock Club.

Indeed, although the book is presented in catalogue format and lacks an explicit overarching narrative there are, nevertheless, obvious patterns that begin to emerge across a significant number of bands. First we see tentative appearances on scratchy black and white shows during the 60s beat boom (Marc Bolan and David Bowie/Jones on Ready Steady Go, the aforementioned Andy Scott on Opportunity Knocks etc.) Then we fast-forward a few years and see those same people bedecked in glitter and glam hamming it up on Top Of The Pops in the period 1971-1973. Then by around 1974 we mostly see the glam bands to start putting away the bacofoil and the glitter and opting for a more conventional rock star jeans-and-leather jacket or cool-white-suit look. Then, finally, in many of the cases we see the number of entries for TV appearances steadily declining as the second half of the seventies draws to a close.

Though I would have welcomed a bit more by way of narrative thread, the book nevertheless provides a fascinating insight into how one of the most visual musical genres of the twentieth century projected itself on to our TV screens. And as an invaluable reference tool I’m sure ‘Look Wot They Dun’ will be something I’ll be going back to again and again. 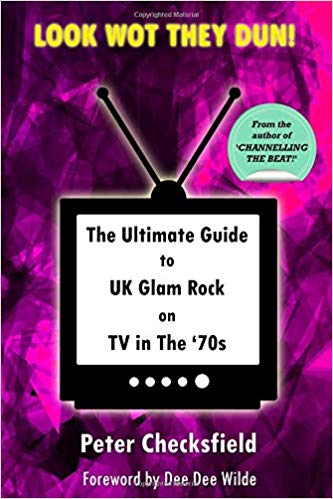