From a small trickle (The Stones, The Beach Boys et al) fiftieth anniversaries are now coming thick and fast in the rock world. 1968 was the year The Sweet were formed so this year it’s their turn and a special celebratory outdoor gig in Berlin.

Guitarist Andy Scott didn’t join until 1970 but, save for a short period in the early 80s when the band was on hiatus, Scott has been consistently touring and flying the Sweet flag for the past five decades. Germany, where Sweet have enjoyed a strong and dependable following over the years seems as good a place as any to host it and fans have flocked from all over Europe, including quite a sizeable contingent from the UK. Indeed most of us from the British contingent are still sitting at the back leisurely quaffing beer when the opening bars of ‘The Stripper’ blast from the PA system. An unexpectedly early start to the gig, we hurriedly race to the stage area to make sure we don’t miss anything.

The band rip into ‘Hellraiser’ but, lest anyone think this is just going to be a standard greatest hits set, we soon get some nice surprises. ‘Turn It Down’ never a big hit in the UK but the heaviest and the rawest of the Chinn-Chapman singles gets a welcome airing, as does ‘Defender’ the band’s most recent single, a sing-along slice of melodic hard rock released in 2015.

Former Sweet guitarist Steve Mann, who was with the band for seven years in the early 90s but was also a key figure in the NWOBHM metal scene in the 80s, is welcomed on stage to guest with the band for much of the gig. And before too long Krokus’s Marc Storace is also introduced to the crowd. Performing ‘American Woman’ and Neil Young’s ‘Rockin’ In The Free World’ this is a nice touch, demonstrating how much Sweet in the early 70s helped lay the the foundations for the generation of rock bands that came afterwards. Another guest is German metal vocalist Doro, who delivers a fantastic version of ‘All We Are’ and proves a perfect fit for the Sweet. Harmony vocals, always an intrinsic part of the Sweet sound, are boosted on stage tonight by the additional presence of some of the Rock Meets Classic touring band. 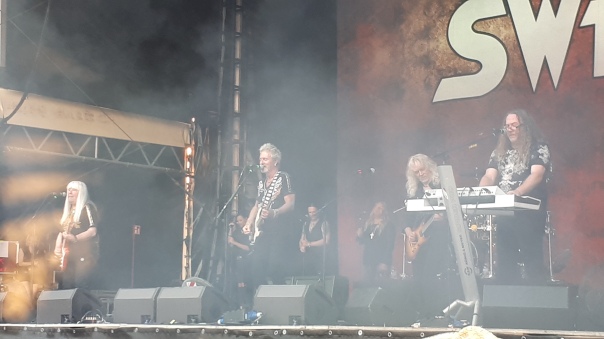 A visibly moved Scott makes dedications to the original band members who are no longer with us, Brian Connolly and Mick Tucker, but amidst the plethora of special guests one person is notable by his absence. Apparently, attempts were made to get Steve Priest along but to no avail. Whatever has gone on between the two in the past it would have been nice to see the two surviving members of the classic 70s era of the band reunite on stage for the band’s fiftieth but it was not to be. None of this prevented this from being a very, very special gig, however. The band unleash powerful versions of some of their more hard-rocking album classics ‘Windy City’, ‘Set Me Free’ and ‘AC/DC’ – proving to any doubters that there was always far more to this band than just the glam hits.

Acoustic versions of ‘Lady Starlight’ and ‘Lost Angels’ follow, along with a medley of the band’s earliest bubblegum hits. Then, after an energetic workout from long-time drummer Bruce Bisland, it’s time to whip the crowd up with some of the glam-era smashes like ‘Teenage Rampage’ and ‘Wig Wam Bam’, not to mention a majestic ‘Love Is Like Oxygen’ and a fabulously rocking ‘Fox On The Run’, the band’s first self-composed mega-hit.

There is an electric atmosphere in the huge outdoor courtyard of the historic Spandau Citadel (not the place where Rudolph Hess was sent to prison by the way, which was demolished after his death to prevent it becoming some sort of weird neo-Nazi shrine). Andy Scott and his band-mates (Bruce Bisland, Tony O’Hora and Pete Lincoln) are clearly moved by the reaction they get tonight and there’s soon thunderous cries for an encore. The band oblige, returning to blast out ‘Action’, Blockbuster’ and, finally, ‘Ballroom Blitz’ the latter with Marc Storace and Doro returning to the stage once more to share vocals with the band.

Sweet (and their special guests) truly give fans a night to remember in Berlin. What a fantastic way to celebrate 50 years of this iconic band.