BBC Young Folk Award winners each year are given a slot at Fairport Convention’s Cropredy festival, and I really enjoyed this trio at Cropredy back in 2011, the year they won their award. But I must confess they’d completely fallen off my radar and it was only seeing a magazine article about them recently that I was prompted to check out their forthcoming schedule and discovered they were due to play Camden’s Cecil Sharp House. So here we are!

Moore, Moss and Rutter are Tom Moore on violin, Archie Churchill Moss on melodeon and Jack Rutter on guitar and vocals. Although forming in 2009 it turns out the trio all continued to live in different parts of the country, and with university degrees to start and complete it as well as other musical collaborations it meant that gigging was sometimes sporadic rather than constant. But now they are on to their second album (the prog-ishly titled II) and we get to hear a number of songs and tunes from that tonight. In a varied set they deliver a few well-chosen traditional songs. But it’s perhaps the tunes where they really, really excel – with stunning interplay between violin, guitar and melodeon. Amazing sounds, of course, but seeing the interaction between the the three as they work a tune from one to the other really makes them worth seeing live.

They do a nice version of the traditional tune Portsmouth – the one given an added burst of fame by Mike Oldfield in the 70s when he had a hit with it. And of the self-penned material, Moss’s tune-set Six Weeks/Early Thursday is a definite highlight. Having spent the past 15 years living in Brockley south-east London, perhaps the biggest surprise of the evening for me is when they announce that one of the next tunes they are going to play is called Lewisham Way, the long main road at the end of our road in SE4. It’s an esteemed street, steeped in creativity, with Goldsmiths College at one end and the music hall singer, Marie Lloyd, being one notable former resident. So it only seems right that it should get its very own folk tune. Written by Moore and coupled with a hornpipe by Henry Purcell it can be found here.

The three go down really, really well tonight and their latest album is well worth a listen. I picked up a copy and Moore, Moss, Rutter are now firmly back on my radar. 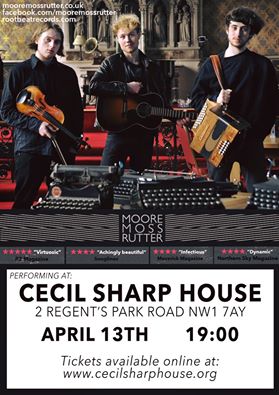