Few who were following popular music in the mid 90s will forget Supergrass bursting on to the Britpop scene with Alright. But the band were always a multi-faceted animal. And since they split in 2010 lead vocalist, Gaz Coombes, has clearly carried the flame for the more reflective, soulful side of Supergrass into his deservedly well-received solo career. And the loud, spiky more punkish side of the band looks to have been taken on into bass-player Mick Quinn’s post-Supergrass outfit, the DB Band. But what then of the quirky, zany, wacky, britpoppy side of Supergrass? The side of Supergrass that most of us came across first before we were even aware of any other. Well step forward Danny Goffey. The erstwhile Supergrass drummer has re-emerged as the frontman for Vangoffey. And after a short tour in support of their debut album last year, Goffey and the band are back with a handful of dates showcasing their brand of chirpy, humorous indie pop-rock.

The Social is a long, narrow basement bar in London’s west end with a tiny, tiny stage at the far end. Indeed, it’s quite a cram getting Goffey, bass-player Drew McConnell (of Babyshambles), two guitarists and drummer, James Yates, on that stage. The band launch into Trials of a Modern Man, definitely one of the stand-out tracks from the album and probably the one that most closely channels the spirit of the hook-laden, slighly manic but instantly catchy Britpop-era Supergrass. I absolutely love it.

Race of Life – a funked-up Ian Drury-esque tale of the life of a sperm is less my cup of tea but the Ray Davies-esque Alfie Loves the Birds most certainly is. There’s plenty to enjoy here and Goffey is a witty and inventive songwriter who is more than capable of writing some catchy hooks. In this small but crowded venue the band are very well received. After working their way through all ten tracks on the album there are calls for an encore but that’s our lot. “We haven’t got any more songs yet,” explains Goffey.

I still hold out hope for a fully-fledged Supergrass reuinion at some point. But in the meantime it’s nice to see Danny Goffey come out from behind his drum kit and front a band. You wouldn’t want to see every drummer try this. But Danny Goffey pulls it off – the Phil Collins of Britpop…

Setlist
Trials of a Modern Man
Sucker
You, You, You
Alfie Loves The Birds
Race of Life
Beta Man
Episode
The No. 9
Phil’s Dummy
Spilt Milk 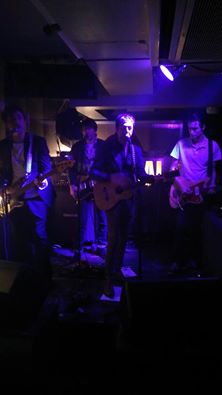