As one after another of the renowned sixties beat groups hit their 50th anniversary it’s fair to say my adopted city of London did pretty well  in churning out what would be some of the biggest and most influential names ever:  The Stones, The Kinks, The Small Faces and, of course, The Who. So it seems entirely appropriate to be sitting in London’s largest and most prestigious music venue to be celebrating The Who’s anniversary fifty and a bit years after the release of their breakthrough single, I Can’t Explain. It would have been fifty years exactly but for Roger Daltrey’s bout of laryngitis last year.  But the o2 is full tonight and last night for the rescheduled dates.

The band, Pete Townshend and Roger Daltrey being supported by a strong cast of supporting musicians including Zak Starkey on drums begin, appropriately, with a brilliantly energetic  I Can’t Explain and proceed to rattle their way through the sort of classics that anyone with a Who Greatest Hits album would expect: Substitute,  Who are You, My Generation, Join Together, You Better You Bet and much more. Some suitably retro Mod-inspired 60s graphics accompany the band on the big screen throughout. We then begin to meander into the more experimental rock opera phase. Not the side of The Who I warm to the most but nevertheless it’s performed well, gives Townshend the chance to flex his creative muscles and Daltrey the chance to relax his vocal chords on a couple of numbers. It’s all finished off with a blistering Won’t Get Fooled Again.

“Hope I die before I get old” is the line that critics have always thrown at the two surviving members of The Who whenever they decide to take to the road. But in a strange and prophetic way the lyrics have turned out to be absolutely true. The post-war baby boomer generation have refused to become old, certainly in a way that any previous generation could possibly have recognised. Rock ‘n’ roll not only changed what it meant to be a teenager forever, it has also changed what it means to be a pensioner forever. Happy 50th The Who!

I Can’t Explain
Substitute
The Seeker
Who Are You
The Kids Are Alright
I Can See for Miles
Pictures of Lily
My Generation
Magic Bus
Behind Blue Eyes
Join Together You
Better You Bet
I’m One Love, Reign O’er Me
Eminence Front
So Sad About Us
A Quick One (While He’s Away)
Amazing Journey
Pinball Wizard
Sparks
See Me, Feel Me
Baba O’Riley
Won’t Get Fooled Again 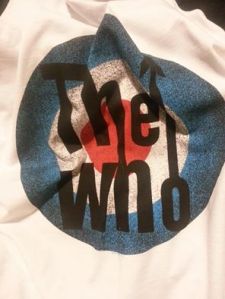