I missed the Gavin Davenport Band gig at this year’s Warwick Folk Festival because, as is the case at so many music festivals, there was an inevitable clash between two acts I really wanted to see. Thankfully, however, Davenport put in another appearance earlier in the day, this time accompanied by fiddle player, Tom Kitching, rather than his full band. We watch the gig in the staggeringly well-equipped Bridge House Theatre, which is part of Warwick School – site of the festival (the luxuriousness of a private education I suppose…)

Davenport’s distinctive vocals were a notable feature of the recently reconstituted Albion Band, which is how I first became familiar with him. But today he concentrates on material from his solo career, including some of his excellent interpretations of traditional songs from his last solo album, The Bone Orchard. We thus get to hear songs like Creeping Jane, a traditional horseracing song collected by Edwardian song-collector, Percy Grainger. We also get to hear the self-penned title track of his solo album. The title was inspired, Davenport tells us, by his time working in a pub and the wonderfully colourful description that the domino-playing elderly Caribbean clientele gave to the local cemetery.

Davenport’s deep, bold, powerful vocal s are perhaps more traditional-sounding than many of his contemporaries on the modern folk scene. But he always avoids lapsing into cliché and his delivery suits the material perfectly.  Davenport’s guitar and concertina playing also adds extra depth and beauty to several of the songs. Kitching, too, is an excellent fiddle player and the two work extremely well together. The audience in the packed (but thankfully air-conditioned) theatre on this blazing July afternoon respond enthusiastically.  This was one of the highlights of the 2014 Warwick Folk Festival for me. 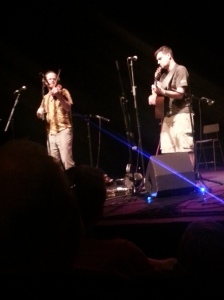