“The most surreal gig I’ve ever been to”

Most gigs I go to I either have a reasonable idea what to expect or know exactly what to expect. But ex-Strangler, Hugh Cornwell and Manc punk poet, John Cooper Clarke, on stage together with the latter singing – actually singing – I had absolutely no idea what to expect. Initially, when I saw the tour advertised and booked tickets I had simply assumed that it was a double headliner tour with both of them doing a set each. But no, they are both on stage together with John Cooper Clarke singing… 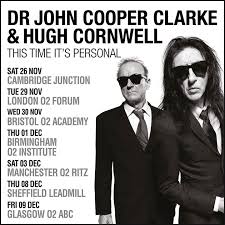 To big cheers Cornwell and Cooper Clarke walk on stage with their band and immediately launch into ‘It’s Only Make Believe’. Now had I tried to guess what tonight had in store for us John Cooper Clarke aping Conway Twitty’s Presley-esque crooning would not have been anywhere on my list. But there’s plenty more: Jerry Leiber and Phil’s Spector’s ‘Spanish Harlem’, Macather Park ‘someone left the cake out in the rain..’, John Leighton’s ‘Johnny Remember Me, ‘Love Potion No. 9.’ It’s a veritable celebration of late 50s/early 60s pop culture and it is, my gig companion for the evening whispers to me, “the most surreal gig I’ve ever been to.”

Sound-wise the band really gets into the vibe of the era, particularly when it came to the gloriously eccentric ‘Johnny Remember Me’ which channels the other-worldly weirdness of Joe Meek’s original production to the full. John Cooper Clarke has a magnetic stage presence, some hilarious between song banter, combining absent-mindedness, self-deprecation and biting sarcasm in equal measure, and a just-about-passable singing voice. As they leave the stage to huge applause I think to myself it’s not a spectacle I’d want to go and see very often but I’m really glad I’ve witnessed it at least once. 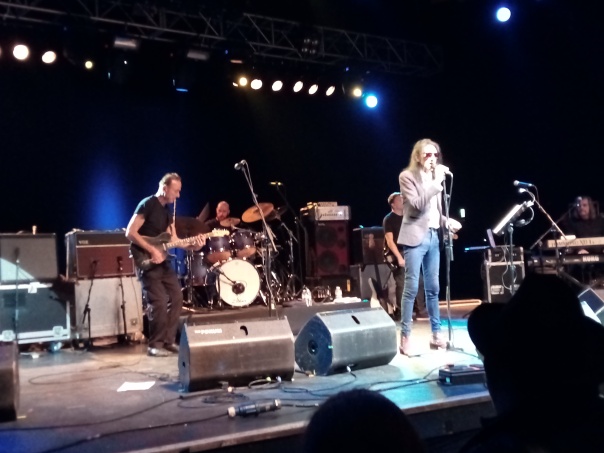 We’ve got the great Hugh Cornwell here though, and so I’m hoping, really, really hoping he’s going to come back on and rattle through a few Stranglers classics while he’s here, too.

Cornwell and band are soon back on stage, Cornwell telling us that this was only the third time that Cooper Clarke had sung in public in his entire life. “Now it’s up to me to try and lift it back up…”

He launches into ‘Black Hair, Black Eyes, Black Suit’ from his 1999 solo album, followed by a brilliant ‘Nice and Sleazy’ with the bass pumping loud and sleazy just like it should. We all get the chance to sing along to ‘Walk On By’ as well. And then Cooper Clarke is back on stage back in normal punk poet mode to give us ‘I Wanna Be Yours’ and ‘36 Hours’ with great backing from Hugh and the boys. Cooper Clarke stays on stage to take lead vocals on a raucous ‘No More Heroes’. At this point two guys at the front start pushing and knocking everyone over. Yes, this may have been great when you were slight, skinny, adrenalin-pumped 16 year olds, but now you are beer-bellied blokes in your mid 50s you just come across as selfish, obnoxious arse-holes. The women around them rightly give both of them a huge bollocking. Never mind, it’s still a great song and a great end to the set before we get them all back on stage for a final encore of ‘Get a Grip on Yourself.’

Rock Out Stand Out

The go to place for all the latest in rock and metal music!

4TheRecord is dedicated exclusively to Ausmusic from all eras and most genres, we will explore the dynamics of the creative process, and reveal the great drama, lyricism, musicality, and emotion behind each classic song.