Not the bank but rather a folk trio from Newfoundland, Indulgence is the fourth album from this long-running Canadian enterprise. Formed in 1997 Atlantic Union has seen various line-up changes along the way but Sally Goddard, originally from England, has been at the heart of the trio since its inception and she brings with her one of those classic English pure folk voices that immediately make you sit up and listen.

Joining Goddard (vocals, guitar, bass, bodhran and concertina) are Dan Rubin (violin, viola, mandolin, octave mandolin, bouzouki, dulcimer, guitar and bass) and Jane Ogilvie (Celtic harp, piano and accordion). More than two years in the making Indulgence comprises nine original tracks and five covers, the latter ranging from the traditional ‘Star of the County Down’ to Bob Dylan’s ‘The Hour That The Ship Comes In’. The rich, Celtic-inspired instrumentation and lovely blend of instruments used across the album provides a fine setting for Goddard’s (and on some tracks Rubin’s) vocals.

The trio guide as through the album as follows:

“The opening track is a gentle reminder that we are not alone. The songs that follow reflect on unrequited love, loss of a loved one and memory loss. We emerge from this with a song for a beloved granddaughter, then move through pieces that share an oceanic setting: songs about transcending racism, surviving war and sailing out of St. John’s harbour on a fully rigged ship. After a piece written by Lord Byron and a nostalgic visit to Mallorca we come to a tribute to the loggers of New Brunswick who supplied masts for the British navy and a rather strange song about kayaking in the Queen Charlotte Islands. The collection concludes with a sonata inspired by Scottish themes and a Caribbean sing-along about the joys of living more simply.”

A pleasing album with some enjoyable songwriting, beautiful vocals and fine melodies, Indulgence will hopefully serve to help Atlantic Union become better known among folk listeners here in the UK. It would be well deserved. 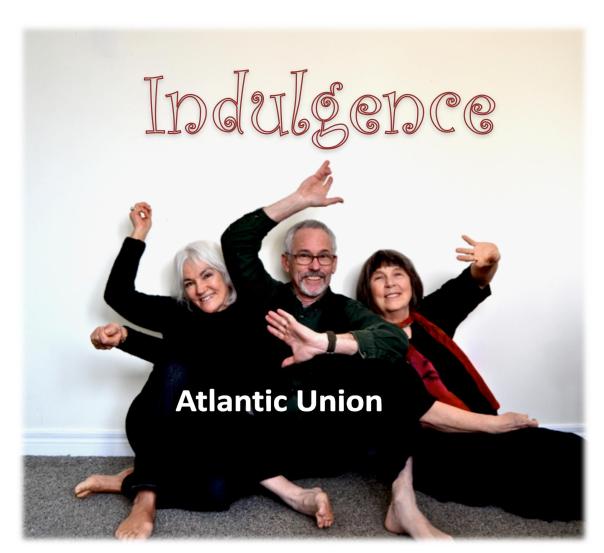