Blood and Dust is the fifth album from Cheshire-based singer songwriter, Gary Fulton. Branded in the acoustic folk category, comparisons have been made with Nick Harper and Rory McLeod and his music has been championed by the likes of Fatea. To be honest, however, there’s so much zestful energy in his songs I heard everything in there, from George Thorogood to 80s/90s indie a la The Las to 60s flower-power era Status Quo. Fulton’s talent is undoubtedly an ability to combine engaging lyrics with unforgettably catchy melodies.

For one who creates music so appealing and with a comparatively weighty back catalogue Fulton has a fairly low-key presence online and there’s not a huge amount of information about the artist to be found either on his reverb-nation site or in the press release that accompanied the album. However, Fulton is certainly deserving of wider attention and, hopefully, the excellent Blood and Dust will go some way to achieving that. 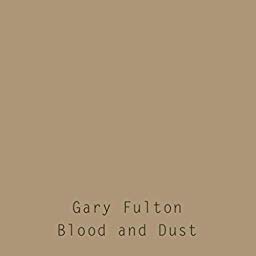