Two’s Company are a duo from Sheffield and Go Together is their debut album. Alice Baillee and David Jenkinson have been playing together since meeting at university several years ago and have clocked up a number of festival appearances as well as support slots for the likes of Martin Simpson and Phil Beer.

Their sound is built around Jenkinson’s guitar and cello-mandolin and Baillee’s flute, with lead vocals alternating between the contrasting voices of the two. The album is apparently representative of their live set and contains a nice mix of traditional songs and original material, with a couple of tunes thrown in, too.

Songs like Bobby, telling the tale of a little boy whose musical promise when he is not engaged in child labour is cut shut when his fingers are crushed in a loom, showcase Baillee’s talents for writing lyrics that evoke the folk tradition and effortlessly take us back to a different age.

The Grove is another original, a gentle song inspired by a small piece of wilderness on the edge of a village that has since given way to a housing estate. Baillee’s voice handles such mournful themes well.

Of the traditional songs, they do a pleasingly reflective version of Will You Go, Lassie, Go? with the duo sharing lead vocal duties. All Among The Barley, this time with Jenkinson on vocals, is another nice interpretation of a traditional song.

Of the tunes Winterfall, a tune-set of two pieces composed by Michael Raven, allows for some lively interchanges between Baillee’s flute and Jenkinson’s strings and is one of the musical highlights on the album.

While their overall approach is not wildly different from many other male/female folk duos Go Together is a solid debut that has allowed Two’s Company to begin carving out an identity for themselves and to contribute some fine songs. This is a welcome start to a recording career. 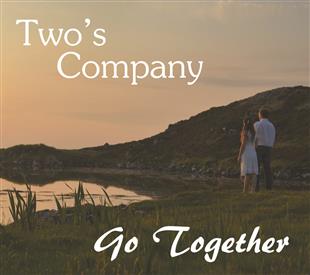 Life past, present, thoughts about the future, and ever changing world