Part punk, part hippy, Dublin-born Tormé, first came to prominence in the late 70s/early 80s as the guitarist with Gillan. His distinctive riffing was as much an intrinsic part of that band’s sound as Ian Gillan’s instantly recognizable vocals. There has been something of a slight interlude since I last caught up with Tormé, however. In fact, the last time I saw him was not long after he left Gillan and was busy promoting his then new solo album, Electric Gypsies.

Skip forward thirty years and Tormé is in London’s Borderline promoting another brand new solo album, Flowers and Dirt, with a classic trio line-up of guitar/vocals, bass and drums. The first song they play though is an old one. Hearing them kick off with Wild West, a great energetic song from the aforementioned Electric Gypsies album, was a delight. That’s not to say there was not plenty of room for new material tonight, however. Several songs from Flowers and Dirt make an appearance and although he has never stopped playing and recording, the album may deliver something of a career renaissance for the guitarist and songwriter. It is Tormé’s first solo album in fifteen years and following an enormously successful crowdfunding appeal this summer, it’s been attracting very favourable reviews. Partytown is one of the new songs from the album that’s performed tonight. Raw and raucous with frantic riffing and the type of chorus you can immediately sing along to, it’s classic unadulterated Tormé

Nicely balanced between old and new material, the crowd were given a great set tonight covering various stages of Torme’s career. For me, Lightning Strikes and Turn Out the Lights were both very welcome inclusions from the earlier days. The main set ended with those two early rock n roll classics that were both given a new lease of life by Tormé’s former band Gillan, back in the early 80s: Trouble and New Orleans. As the band are called back on stage for an encore and perform two more covers, Bony Moronie and Jimi Hendrix’s Fire, I did begin wondering why I’d left it quite so long before catching up with this unique performer once more. But it was certainly worth the thirty-year wait. 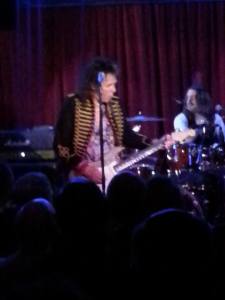