Normally, I’m all for big named bands giving up-and -coming ones a helping hand with a support slot on tour. But when it comes to big rock reunions, and I’ve seen a few, nothing beats a well-chosen,  established act from a similar era to kick things off. Status Quo have chosen brilliantly here by getting in Wilko Johnson as the support for their “frantic four” classic-era reunion tour. Diagnosed with terminal cancer in early 2013, former Dr Feelgood guitarist, Johnson, made the brave, inspirational and utterly life-affirming decision to use his remaining time, not pursuing a debilitating and ultimately futile course of treatment, but by saying farewell to his fans with a series of live dates. There has been no sign of his being incapacitated just yet and so further dates have been added, the Quo tour being the latest. And what a magnificent performance, not only from Wilko but from bass player Norman Watt-Roy and drummer, Dylan Howe. The crowd roared its approval as the trio delivered blistering performances of Feelgood classics like Roxette, Back in the Night and She Does it right. The admiration and affection for the man tonight was moving but this was no mere sympathy vote. It was a genuinely magnificent set and the crowd responded accordingly. Quo could not have chosen a better way to open up the evening.

After a shortish break the lights dimmed, the famous spoken intro from the 1977 live album was relayed over the PA, the silhouette backdrop made famous by the “Hello” album cover came down and Francis Rossi, Rick Parfitt, Alan Lancaster and John Coghlan walked on stage. The four are reunited for a second time after their reunion tour last year following a 32-year break. Since the demise of the classic line-up in the 80s Status Quo, under Rossi and Parfitt, has very much continued, of course. But what we saw tonight was something very different from the lighter keyboard-heavy pop-rock act that continues to fill arenas every year. Like last year’s  Quo re-union tour, again there was a focus on material from the early 70s albums, rather than the big hits of later years. It was a very similar, setlist too, but although lacking the emotional resonance of seeing four guys walking out on stage together for the first time in over 30 years, it more than made up for that by being a somewhat tighter performance from the band than in 2013.

As in last year’s reunion, returning bass player, Alan Lancaster, got a hefty slice of the lead vocal duties, Lancaster’s gritty vocals being something that later versions of the band have definitely missed out on. I’ve seen the post-Lancaster/Coghlan Status Quo at a couple of festivals, and while they are undeniably fun and entertaining, the quality of songs and the earthiness of the performance when the original four get on stage together provides something different altogether. Highlights for me were Lancaster opening with Junior’s Wailing, Rossi singing In My Chair, and a magnificent performance of perennial crowd-pleaser Forty Five Hundred Times. Although the focus was very much on album classics, I must confess when I saw them last year I was ever so slightly disappointed that they had chosen not to play one of their greatest ever hit singles, Caroline. Tonight, though that was rectified and the band encored with a magnificent version of Caroline, followed by traditional show closer, Chuck Berry’s Bye Bye Johnny. Definitely, a memorable night for British rock. 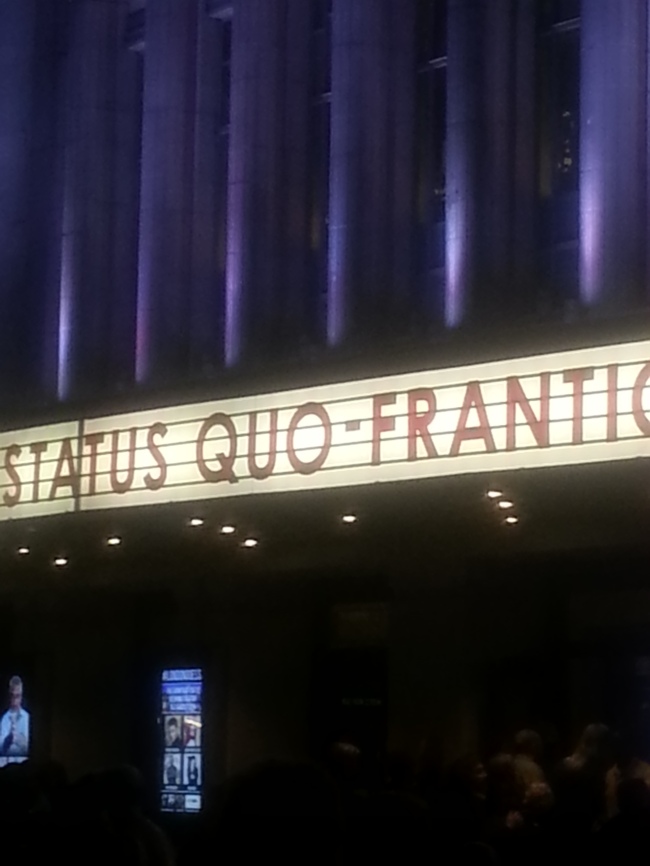