It’s 2019 and yet another band are celebrating their fiftieth anniversary. That post beat-boom period of the late 60s to early 1970s was a period of exceptional creativity in popular music, perhaps unparalleled. From hard rock, glam rock, prog rock and, indeed, folk rock so many bands and styles made their mark and we are lucky to have a good number of them still touring today.

Steeleye Span are not resting on their laurels, however. This tour is about far more than a career retrospective from the band’s weighty back catalogue. The band have a new album out and songs from that are given as much prominence in the set as some of the old favourites. The album is not officially released until June but it’s available for sale on the tour so you can get a sneak preview via both the stage and the merch desk. In contrast to the epic prog-folk of the band’s Wintersmith album of a few years ago Est’d 1969 is very much in the spirit of the band’s ‘classic era’ early 70s albums, both in terms of song choices and overall sound. A version of Dave Goulder’s ‘The January Man’, an adaptation of John Masefield’s poem ‘Roadways’ and various traditional ballads from the album are among the songs performed tonight. Of course, there is room, too, for a good number of Steeleye Span favourites like ‘One Misty Moisty Morning, Alison Gross and Black Jack Davey. A new song, the beautiful ‘Reclaimed’ written by Prior’s daughter and sung a capella forms part of the encore, along with the ever-present ‘All Around My Hat’.

With a line-up that’s always been evolving only Maddy Prior remains from the band’s earliest days. Unlike those other veterans of the folk rock scene, Fairport Convention (whose fluctuating line-up has stabilised in recent decades), Steeleye Span continues to evolve. Jessie May Smart, who replaced long-standing fiddle player Peter Knight a few years ago, is currently on maternity leave so her place on this tour is ably filled by classical violinist Violeta Barrena. Lining up alongside Maddy Prior, the rest of the band’s current members are Julian Littman, Andrew Sinclair, Roger Carey, Liam Genockey and Benji Kirkpatrick. Talented players all, they bring a fantastic assortment of instruments, sounds and techniques with them, not to mention a rich array of voices.

Although rightly celebrated as icons of folk rock this band have always continued to vary their style, their set-list and, very often, their line-up from tour to tour which means there’s always an element of the unexpected and nearly always something very special to look forward to. Long may that continue. 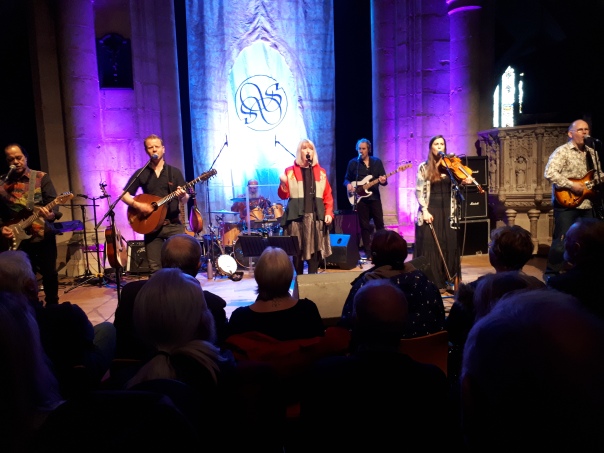