The title track is a strong opener. A powerful chugging riff with some nicely melodic lead guitar and a catchy chorus, their music definitely embraces a timeless classic rock feel while the vocals give it a more contemporary edge. ‘Hit It ‘n’ Quit’ It is another stand out track. Big and bombastic with a machine gun-like rhythm section and a Guns N Roses-esque stadium rock chorus, I can imagine this going down well live. ‘Rattleshake’ is another great track with some superb soloing which definitely helps convince you this band has got something going for it.

And in bolstering their classic rock pedigree still further the band can point to their drummer, Olly Smith, who played alongside current Judas Priest guitarist, Ritchie Faulkner, and the daughter of Iron Maiden bass player, Steve Harris, in the Lauren Harris Band. The other members of the band are Joe Hawx (vocals), James Forrister and Ryan Stageman (guitars) and James Amos (bass).

While I am not quite sure all of the songs are memorable enough to immediately pass the singing-in-the-shower test (always the sign of a genuinely classic hard rock record for me) there is, nevertheless, some real promise shown on this album and ‘Ain’t No Rest’ it is a worthy debut.

A big, fat, bluesy southern-rock sound, Big River know how to pull off an authentic classic rock vibe. Hometown Hustler is the band’s single release ahead of their forthcoming debut album. A meaty riff, gritty vocals, catchy chorus and delicious harmonica, Hometown Hustler also showcases some fine songwriting abilities as well as, hopefully, providing a real taste of what the album has in store when it’s released later this year. The band maintain Hometown Hustler has already become a firm live favourite after being introduced into the set earlier this year and I can see why.

Having enjoyed the Gravesend-based band last year when they shared a bill with ex-Bad Company guitarist, Dave ‘Bucket’ Colwell, it was clear then that they drew on some impeccable musical influences and could turn out some classic-sounding guitar-based blues rock. This new release has cemented their reputation in my mind. A band well worth checking out.

Keystone is the new album from Italian-American alternative metal outfit, Klogr. Some may find the juxtaposition of very melodic, rather proggy instrumentation with grungy, alt-rock vocals something of an acquired taste but there are certainly some strong tunes here.

As with their previous album ‘Black Snow’ environmental themes loom large. Explaining the thinking behind the title, band-leader and vocalist/guitarist Rusty Rustichelli reveals, “Man proclaimed himself the “Keystone” of our system but he is just a guest, a not-essential animal. Without a lot of underestimated living beings, like bees, the cycle of nature would suffer serious damages. The earth without human beings could exist, human beings without the earth, no.”

One of the stand-out tracks is ‘Dark Tides’, dedicated to the marine conservation campaigners, Sea Shepherd, with whom the band have had a long association. Melodic and thoughtful, yet forceful and, at times, downright brutal, it warns in dramatic fashion of the threat posed by the destruction of the ocean ecosystem.

The album has been mixed by triple Grammy winner, David Bottrill, who has an impressive CV, working with the likes of Peter Gabriel, Muse, Smashing Pumpkins, Tool, Dream Theater, Stone Sour and Rush.

Personally, the vocals don’t really work for me but that is not to deny there is some great musicianship on this album along with some compelling song-writing, some powerful lyrics and some quality production. Fans of the band will certainly not be disappointed with ‘Keystone’. ***

This review was originally published by Bright Young Folk here

“An alternative national anthem” is what Wigan-based folk-rockers, Merry Hell, bill the title track of their new EP, Come On England! It is not difficult to see where they are coming from: in a country that’s been riven by inequality and division, they aim to present a hopeful vision for the future.

There is passion, defiance, warmth and optimism in the lyrics: “On the streets I have seen those with greed and hate in their eyes; and those with their hearts and their hands open wide.”

The socio-political theme continues in We Need Each Other Now which, like the title track, also appears on the band’s current Bloodlines album. Again, this is an anthemic sing-along with heartfelt lyrics that one can imagine resonating really well with audiences on the live folk scene.

Lean On Me, Love is more personal and more reflective, a gentle acoustic track, yet with Andrew Kettle’s powerful, distinctive vocals still delivered with that same air of sincerity and determination.

The final track is a live version of The War Between Ourselves, a bouncy Levellers-esque slice of indie-folk that has been a mainstay of the band’s live performances since Merry Hell first formed in 2010.

An alternative national anthem? That might be a tad ambitious but this EP certainly contains some rousing anthems for troubled times and it is highly likely that Come On England! will be a firm live favourite in the band’s set list for years to come. 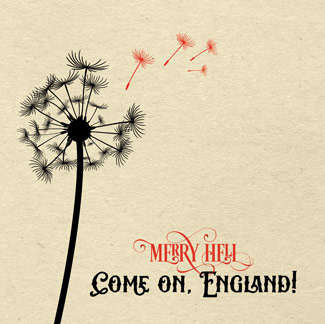 A Rock & Roll DJ Mix for the Great Outdoors! Listen to over 24 hours of Classic Rock, Indie, Punk, Folk, Psychedelic & Hard Rock mixed for your Camp, Cottage or Cabin!

Making My Home A Haven is important to me. Sharing homemaking skills. Recipes and food. Bible Studies. This is a treasure chest of goodies. So take a seat. Have a glass of tea and enjoy. You will learn all about who I am and Our Neck Of The Woods.

Discover ©SK's 🆆🅴🅴🅺🅻🆈 🅵🅻🅰🆂🅷 🆂🅰🅻🅴🆂 on our Site | We offer unique graphics and artwork designs on T-shirts, Apparel, Mugs, Bags, Posters & Prints and much more gifts for Whole the family, our T-shirts are available in a huge variety of styles, sizes, colors and designs for all kinds of occasions.

News, views and reviews of both local and national artists, performances and venues.