I’ve seen the mesmerising Gigspanner live on quite a few occasions now (nine times in the past four years) and described their utterly unique performances here and here and here!

Gigspanner are ex-Steeleye Span fiddle player, Peter Knight, guitarist, Roger Flack, and percussionist, Vincent Salzfaas. What is different about tonight though is that they are joined by folk duo Phillip Henry and Hannah Martin – for what’s been dubbed the Gigspanner Big Band. I was always hoping this would be something special. But at the same time I didn’t want to see Gigspanner lose the essence of what makes the band so utterly unique into some generic worldy, folky sort of jam session. I needn’t have worried. Henry & Martin do bring something extra to the stage in terms the former’s awe-inspiring slide guitar and the latter’s additional fiddle and beautiful vocals. Yet at the same time they absolutely work with the grain of what makes Gigspanner the act that it is and adding to that rather than simply muddying it up.

It was nice to some well-established Gigspanner favourites in the setlist tonight: Butterfly, Death and The Lady, Hard Times of Old England and King of the Fairies as well as a beautiful Banks of the Nile (which many will know from Sandy Denny’s back catalogue) sung by Martin.

Gigspanner has always been a complete melting pot of musical influences: English folk meets Cajun jigs meets French waltzes meets African drumming and much more besides. And the guest duo certainly bring in a bit more of the English folk influence – but also, with the slide guitar, they bring an American country blues feel and, at times, traditional Indian influences, too, (Philips studied Indian classical guitar in Calcutta) which all add to the already rich texture of Gigspanner sounds and influences.

It’s perhaps no surprise therefore that one of the biggest cheers of the evening comes when Peter Knight lets slip that the five of them are going to be making an album together.

The venue itself also played a part in making this a special evening. Built into the cliff face in the 19th century as a church, it fell into disuse and disrepair in the mid twentieth century but was saved, given an extensive refurbishment and re-opened as a quite magical arts venue in the late 90s. A magical trio meets up with a magical duo in a magical venue. What more could we have asked for. 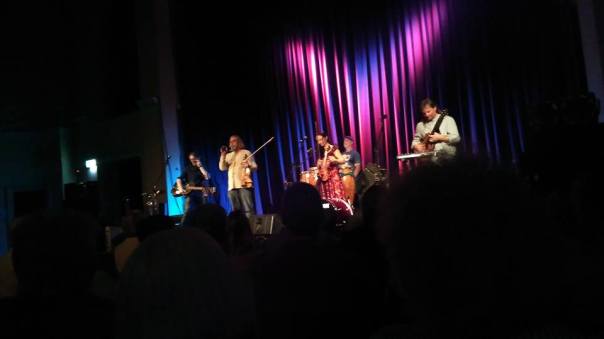