“This soul-restoring festival” is how one of our number described his experience of Cropredy 2014. And soul-restoring is certainly a description that can be applied to Cara Dillon’s performance.

Irish folk singer, Dillon, has been scooping up music awards for over a decade now and it’s not difficult to see why. Her elegant, crystal clear vocals are backed by a talented band of musicians, including husband Sam Lakeman on piano. Her new album, A Thousand Hearts, has been attracting rave reviews and songs from it featured prominently in the set.

She and the band perform a mixture of traditional and contemporary material, with Child ballads like Bright Morning Star being performed alongside songs like River Run, a song from a ’90s indie band that Dillon performs a stunning version of, accompanied only by Lakeman on piano. Even with folk standards as familiar as “As I Roved Out” she applies calm beauty of the Cara treatment and makes the songs truly her own.

This was indeed a soul-restoring performance and one of the highlights of Cropredy 2014. 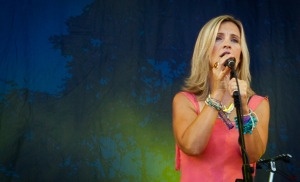 Your No. 1 Entertainment site